Finesse Fly Fishing? Most would argue that fly fishing is finesse fishing to begin with. Most trout flies are smaller than the smallest baits or lures. The presentation you get with a fly rod is almost as delicate as you can achieve.

I say almost because there is a fishing style that is even more subtle and even more delicate than fly fishing.

Even with a line that light, the casting is precise. The rods are specifically designed to cast the almost weightless line. Because the line is extremely light the drifts are more natural and the catches are more frequent. Most people who try tenkara report that they catch more fish. That is a common theme in any area of finess fishing, and finesse fly fishing is no different.

Although the exact origin of the word "tenkara" is not known, the literal translation is "from the sky" and it accurately describes the way an unweighted fly falls to the water's surface without so much as a ripple. Unlike in western fly fishing, where a floating line can land with a splash or cast a shadow over a wary trout, tenkara masters cast so that their line never touches the water.

That may sound either mystical or downright impossible, but it is not only possible, it is achievable by any angler who puts in the time to practice and who chooses his or her equipment wisely.

The key to keeping your line off the water is to choose a long rod (as long as you can get away with) and a light line (as light as you can get a way with). The combination of the long rod and light line, plus keeping the rod tip high is half the battle. The other half is ending your forward cast with the rod tip high, so that the fly lands first.

The following short video, produced by Discover Tenkara, clearly illustrates the fly-first cast. Note that the forward cast ends with the rod tip still high, which allows the line to turn over completely and the fly to land first. The hi-vis casting line stays off  the water's surface.

I cannot overemphasize the importance of your fly landing first. When you cast upstream, raise your rod tip as the fly drifts back down. That keeps the brightly colored line off the water 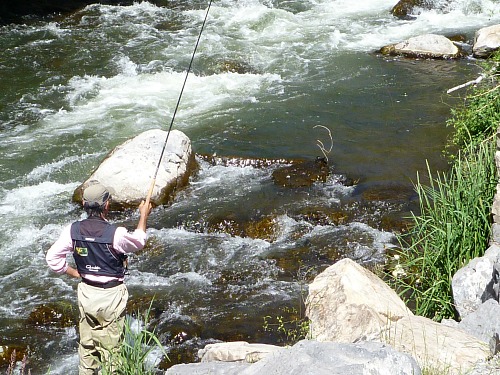 The benefit of a fly-first cast and the ability to keep your line off the water to minimize drag is not just to avoid lining fish, though.  You can now cast to, and fish, targets that are impossible to fish effectively with a fly line that gets caught in the current as soon as it lands - pulling your fly out of the target zone.

There are several types of tenkara line, and each has its fans. For finesse fly fishing, though, the best tenkara line to use is level hi-vis fluorocarbon line. It is high density so it is easy to cast. It is hi-vis so it is easy to see. Hesitations or twitches in the line may be your only indication of a subtle take. Other line types, whether furled or floating, are heavier and thus harder to keep off the water's surface. To achieve  finesse fly fishing, you want your line off the surface (except for when you consciously use stream features to pull your unweighted fly deeper, in which case your line must be in the water). 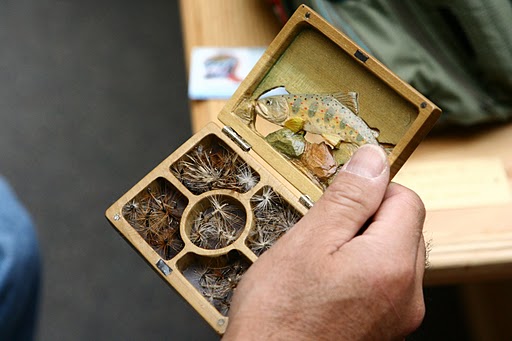 There may be as many tenkara fly patterns as there are tenkara anglers. The flies are simple in design and simple to tie. They do not seek to match specific insects, and are thus impressionistic rather than realistic. Most tenkara anglers in Japan use only a few patterns - perhaps loosely based on a few recognizable styles, but generally unique to the angler. Nearly all are wet flies. Few have names other than just "kebari," which is the generic term describing any fly pattern of Japanese origin.

In the west we have named several Japanese tenkara fly patterns, for example the Takayama Sakasa Kebari - which would more accurately be called "any one of several different Japanese tenkara flies (kebari) utilizing the reverse (sakasa) hackle style that were used in the region around Takayama."

The key to the outstanding effectiveness of tenkara, and why it truly is finesse fly fishing, is not the fly, though. It is the way the fly is presented. That presentation often involves manipulating the fly. It is not an exaggeration to say that fly manipulation is central to tenkara. Anglers will start with a natural, drag free drift but if that doesn't yield a strike, they will try any of several subtly different fly manipulation techniques (which could be loosely described as pulsing the fly).  With the shorter rod and the heavier line stuck in the surface tension, western fly fishing gear just cannot perform the same degree of fly manipulation.

There are several aspects, unique to tenkara, that truly make it finesse fly fishing. The rod is long, the line is light and the line is tied to the rod tip. That means you are casting the same length of line with every cast, so you can become extremely accurate. With the line held off the water's surface, you have almost no drag.  The fly doesn't move unless you want it to.

If a drag-free drift doesn't draw strikes, then you want the fly to move, to entice the fish to strike. The long tenkara rod and light tenkara line, held off the water's surface, allow any number of manipulation techniques, ranging from a gentle rhythmic pulse upstream or across the current, to a pulse interspersed with a drift (like a series of Liesenring Lifts), to skating the fly to using a breeze to make the fly bounce on the surface. What you can do with your fly is limited only by your imagination (and your skill level). 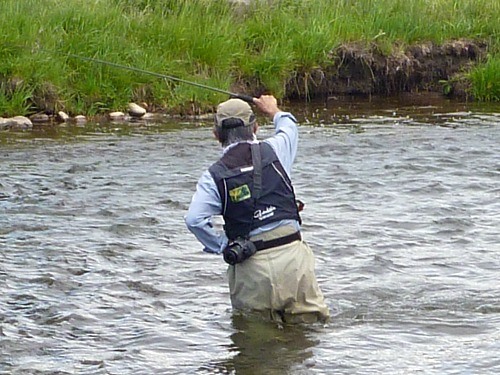 In Japan, tenkara is specifically and solely a method for fishing mountain streams. A Japanese tenkara master does not just use a rod and line and fly, he also uses the water. The current and eddies and seams and plunge pools are all utilized for subtle manipulation techniques, and they are just as much a part of tenkara as the rod is.

For example, a plunge pool can be used to sink a fly towards the pool bottom (the same fly that you previously fished on the surface, wiggling like a stuck insect with your rod held high and your forefinger tapping the grip to send vibrations through the rod and down the line). An eddy or back current can be used to hold a fly motionless because your line, held above the water's surface, doesn't get swept downstream.

With respect to tenkara, you will often read "rod, line, fly." There are four elements, though: Rod, Line, Fly and Water. The master uses them all. To understand why each is important and how they are all interrelated is to understand why tenkara is finesse fly fishing.

I found it very interesting that one of the Japanese anglers who posts very nice videos on Bait Finesse Fishing for trout said in one of his videos that he wished he could get the same simple, direct connection with the fish on his baitcaster that is possible with a tenkara rod.

With tenkara, there is no need to mess with reel settings and you don't feel that you spend your whole day reeling. It is just pinpoint cast, a short drift and another pinpoint cast. Your casts are much shorter, but even that gives you a closer connection to the fish. Granted, he is a lure fisherman, not a fly fisherman, but it is still a valid point whether lure fishing or fly fishing.

The fly manipulation that is a key part of tenkara fishing is also so much more delicate than the twitching of a lure or even the stripping of a streamer. The Japanese term for it, when translated by Google, comes out as the "invitation." It really is almost as if you are asking the fish to come out and play for a while.

One final point, the Ultralight Fly Fishing folks finally tried tenkara and were won over. It really is the ultimate in ultralight, and it is indeed finesse fly fishing.

One of the biggest changes since fishing Tenkara and Keiryu is the way I read the water. I used to look at the water in front of me and judge it with a general appraisal of where the fish might be. Now I look for holding places that may just be inches square and drop a fly or bait in that area. I can't believe some of the fish I have pulled out of those spots.