With all the concentration on the Daiwa Spoons recently, it is easy to forget about the C'ultiva ajing jigs and plastics. Word to the wise: "Don't!" 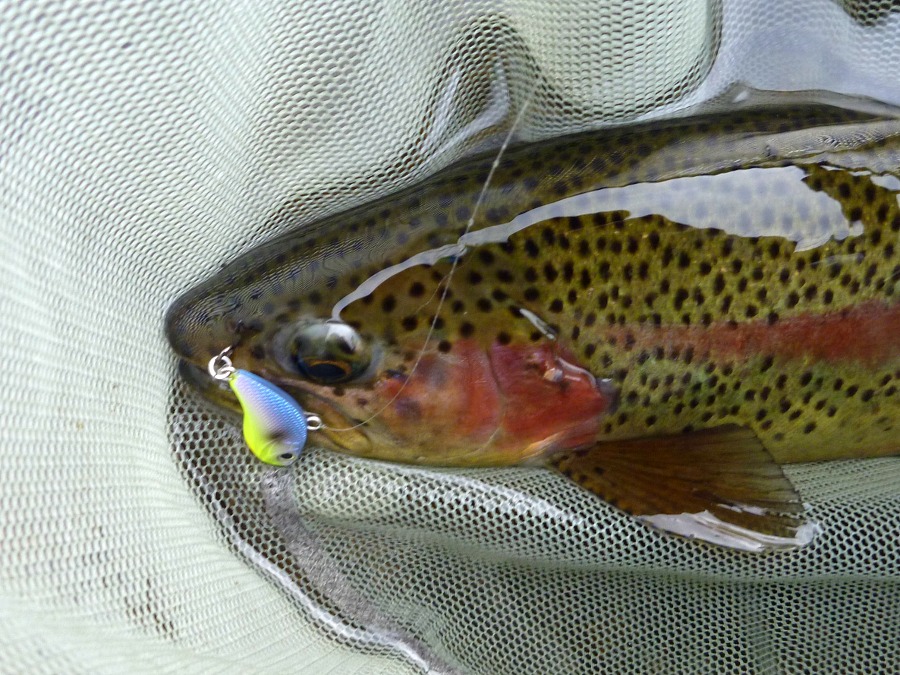 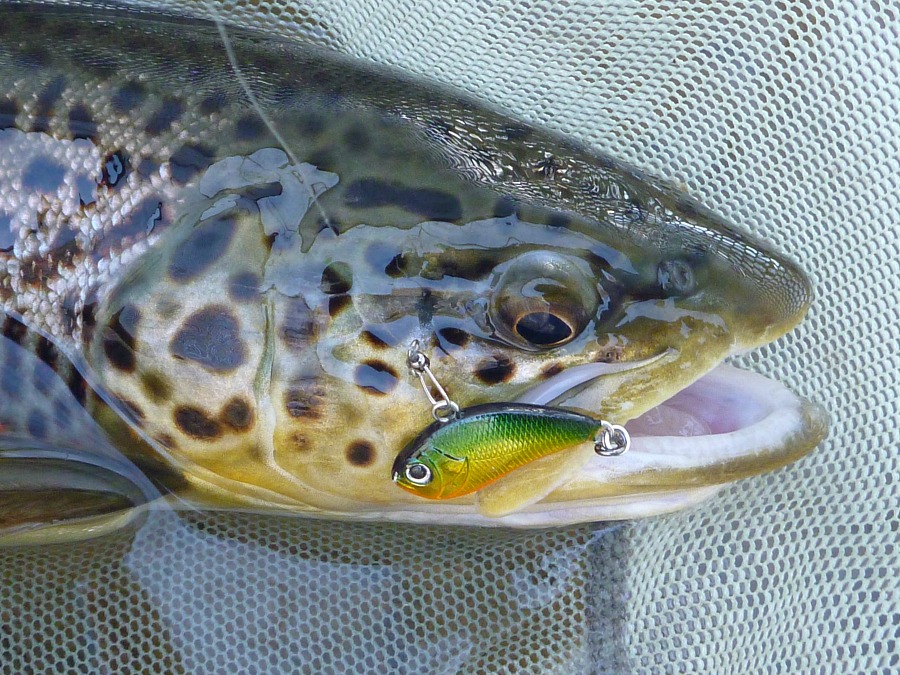 One fish caught this week.

I started off fishing with a lure that I hadn't decided whether to carry. I still haven't decided. I have caught a couple trout with it, but only a couple. I think it might be a really good bass and crappie lure (and that was probably its intended use).  The shape is perfect for a baby sunfish, and baby sunfish are a primary forage wherever they exist. Most trout streams don't have sunfish, although I have caught a few bluegills and redbreast sunfish in streams that were stocked with trout.

The best thing about the lures is that they come with a single hook. The hook is barbed, but it is easy to bend down the barb. They don't have much action on fairly slow, steady retrieve. If you stop and start the retrieve they will dart from side to side and if you retrieve them quickly they will vibrate. I'll fish with them more and then decide. 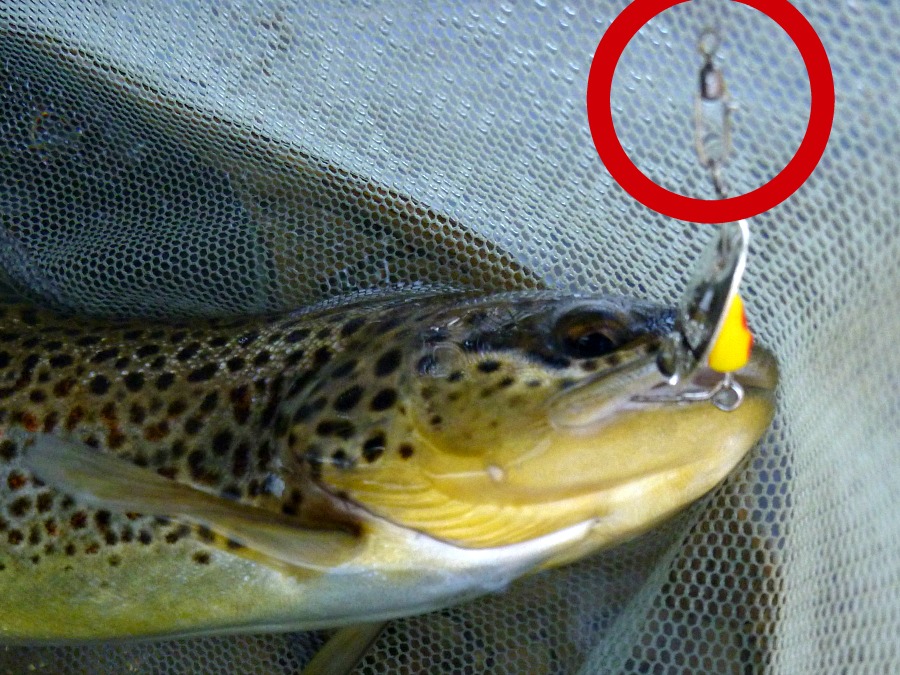 After one (and only one) fish, I then switched to a spinner. Regular readers of Finesse-Fishing.com know I much prefer spoons over spinners because spinners cause line twist. Saturday was my first chance to use the C'ultiva Micro Snap swivels. They do indeed reduce line twist. They are much smaller than the common snap swivels available in the US and thus are probably a better choice for people who do fish spinners. 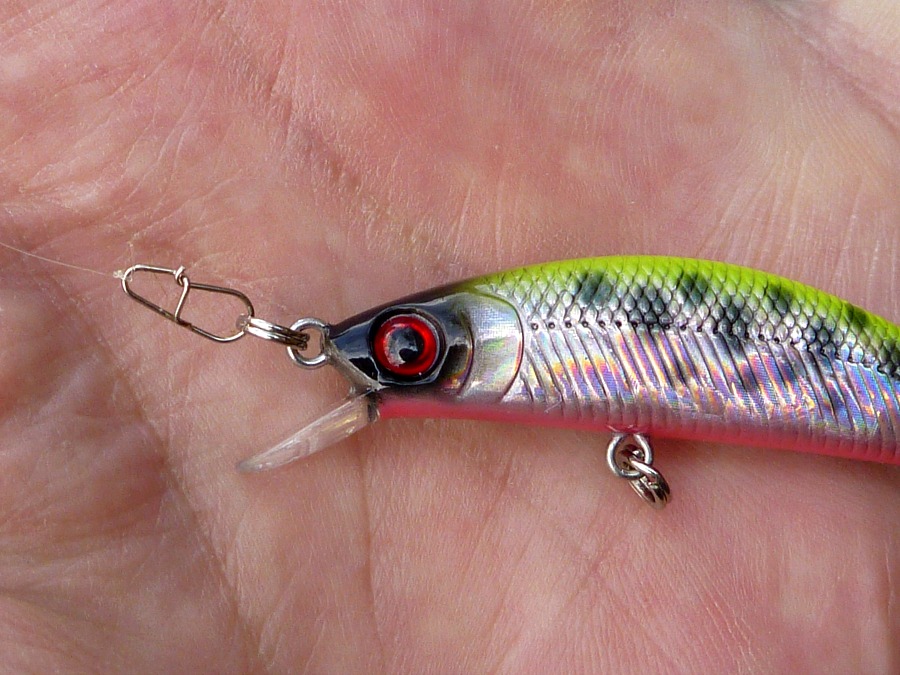 Personally, I will probably use the C'ultiva Tairiki Snaps instead. I'm still not excited about spinners and I find the Tairiki Snaps a bit easier to close than the Micro Snap Swivel. Unfortunately, I can't show you one with a fish because after pretty slow going with lures I switched to ajing jigs and soon started catching fish. I didn't switch back. 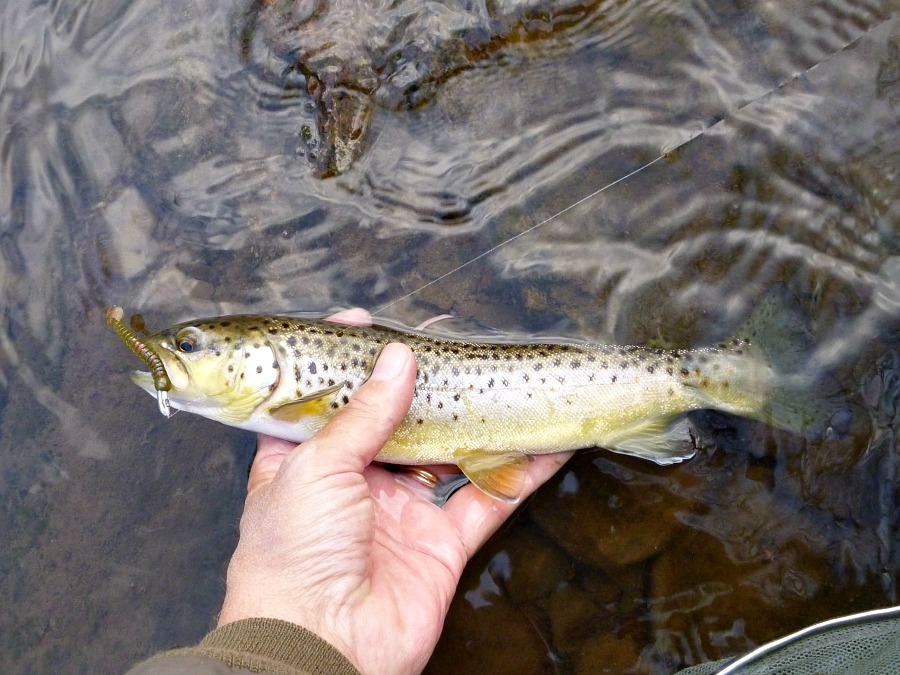 I have caught fish before with the C'ultiva Ring Kick Tails along with the JH-85 jig heads. When the fish don't want a spoon or plug, they're a good alternative. You can bounce them along the bottom and the shape of the JH-85 jig head makes them tend to slide over rocks rather than get stuck behind them. 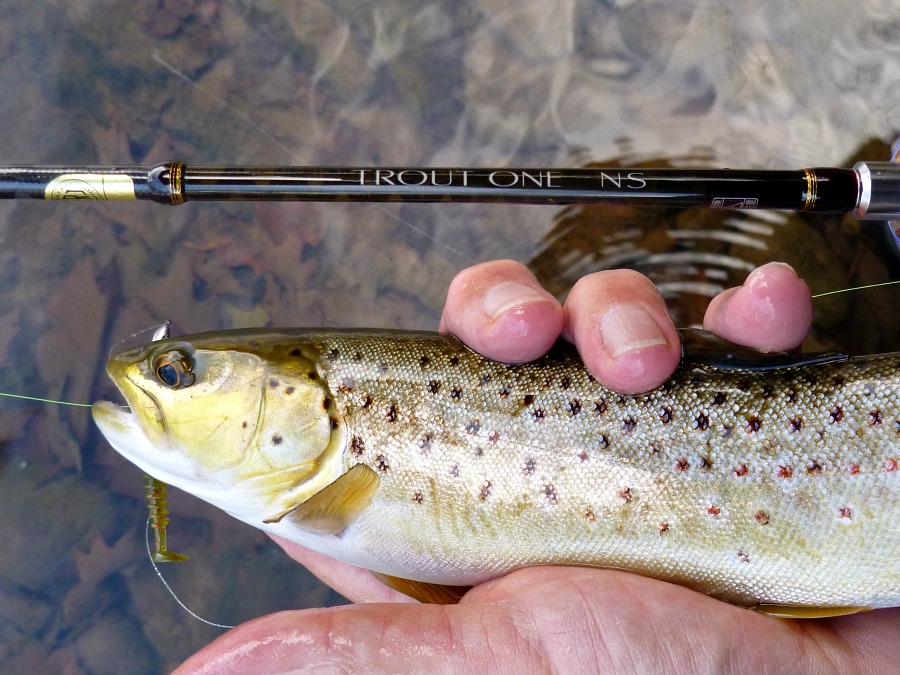 And they do catch fish! I don't know what the fish think the Ring Kick Tail is, but I suppose it could represent a minnow or a crayfish or a hellgrammite depending on how you fish it. On Saturday, all the catches came on a tight line mostly dead drifted with the current, with just a few very slight twitches. I did miss what would have been the largest fish of the day when it almost came out of the water trying to grab it at as the Ring Kick Tail was pulled to the surface at the end of a swing. 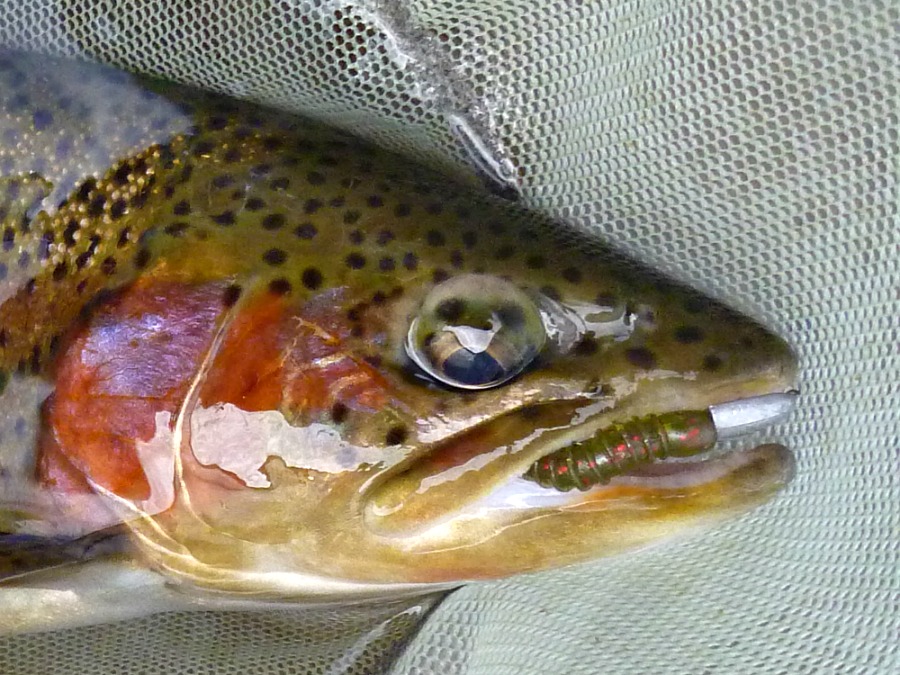 I can't complain about the fish I did catch, though, particularly this brilliantly colored rainbow.

I am pretty sure I hooked this fish several weeks ago (same lie, same coloration) but it broke me off. If it is the same fish, it successfully dislodged the minnow plug I left in its jaw that day. Chalk that up to another advantage for single barbless hooks! 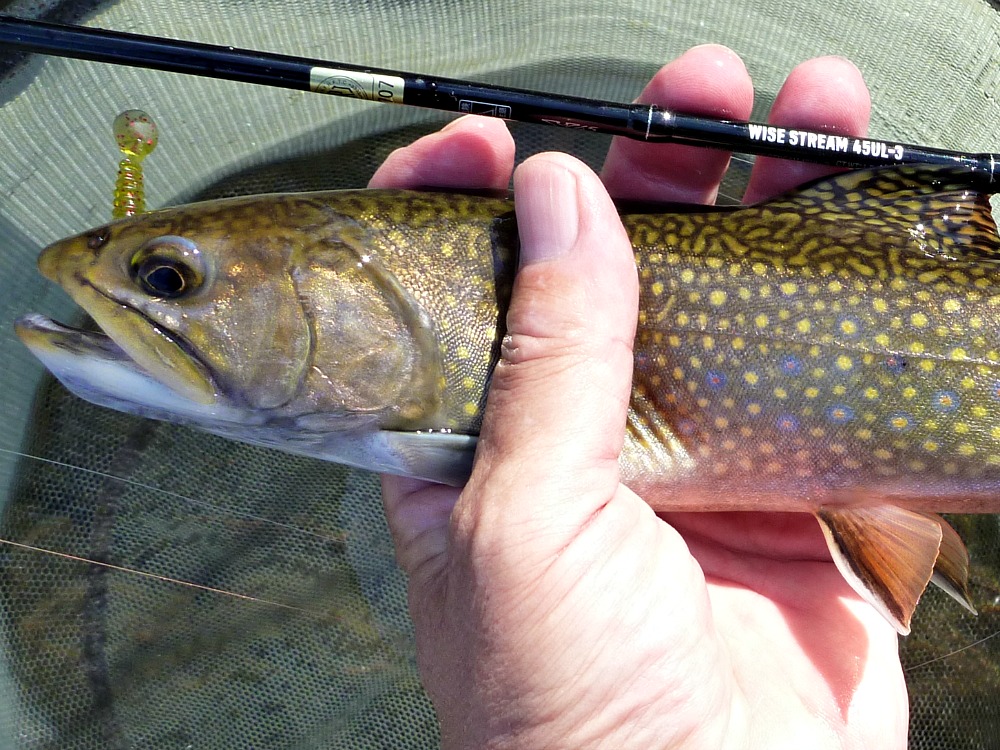 Jig heads and ring kick tails work for brookies, too.

This brookie made the day a slam (there are no cutthroats in that stream). Most of the fish are stocked, but I think there is some natural reproduction of browns where I was fishing and of brookies in the stream's headwaters. Given the size and location of this brookie, I am sure it was stocked. Still - it is nice to catch a brook trout.

If you are after any fish that eats minnows, bugs, or worms ( which is about any fish larger than a micro, really) - you might find the C'ultiva Ring Kick Tails and JH-85 jig heads to be pretty productive. They certainly have been for me.

It's a tough choice! The Shimano has a slightly softer action - closer to what I would think of as ultralight rather than light. The Daiwa is noticeably a bit stiffer. Both will cast the Daiwa Presso Vega .8g spoons just fine. Both will cast the Daiwa Crusader 4g spoons just fine. I think if I was going to fish heavy sinking minnow plugs I would prefer the Daiwa. For lighter lures like the 2.5g Crusader or the 2g Yo-Zuri Pins Minnow Single Hook I would prefer the Shimano.

The biggest difference for me, though, is that the Shimano is a 2-piece rod and the Daiwa is a 3-piece rod. If you can drive to (or at least close to) where you will fish, and if you only will have one rod with you, there is no reason not to have a 2-piece rod. If you have to hike in a ways with the rod strapped to a backpack, or if you will switch off between a couple rods and always have one of them strapped to a backpack or sling, then the 3-piece rod offers a major advantage.