On Friday I played hooky. The weather forecast was for rain both Saturday and Sunday, so I decided to get out when the getting was good. It ended up being a very good day, the first "many" day I've had for a long, long time.

My last few essays have been about "Baitcasters for Brookies," suggesting that fishing for little wild brookies in the headwaters might be the ultimate in ultralight angling, and that an ultralight baitcaster would fit right in. 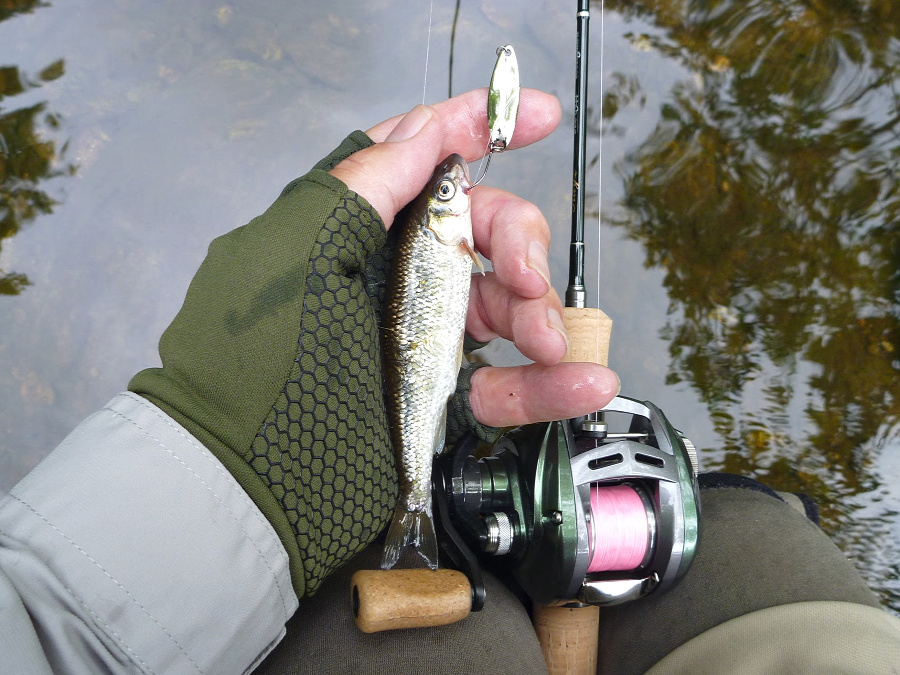 I hadn't really thought about baitcasters for micros, but I may have to rethink that! I've taken creek chubs and river chubs with spoons, and fallfish (technically not micros because they get well over a pound when fully grown) with both spoons and spinners.

I caught three fallfish on Friday, all about the size on the one above, one with a spinner and two with spoons. The one pictured above really surprised me. It was my second cast of the day and I was not expecting to catch a small fallfish with a 2.5g Shimano Slim Swimmer spoon. The second one of the day was caught on a 1.2g Forest Factor spoon, which is about the size I would expect a small fallfish or large creek chub to take. The 1.2g spoons are as light as I can cast effectively with the Daiwa Alphas Air Stream Custom reel. I'm sure that proficient casters can cast lighter lures, but I'm still fairly new at it. I can't cast them far, but I can cast them far enough to catch fish in a small stream. (I'm also sure now that I don't have to cast lighter lures - even for micros!) The third fallfish of the day was caught with a 2.6g Palms SpinWalk spinner. 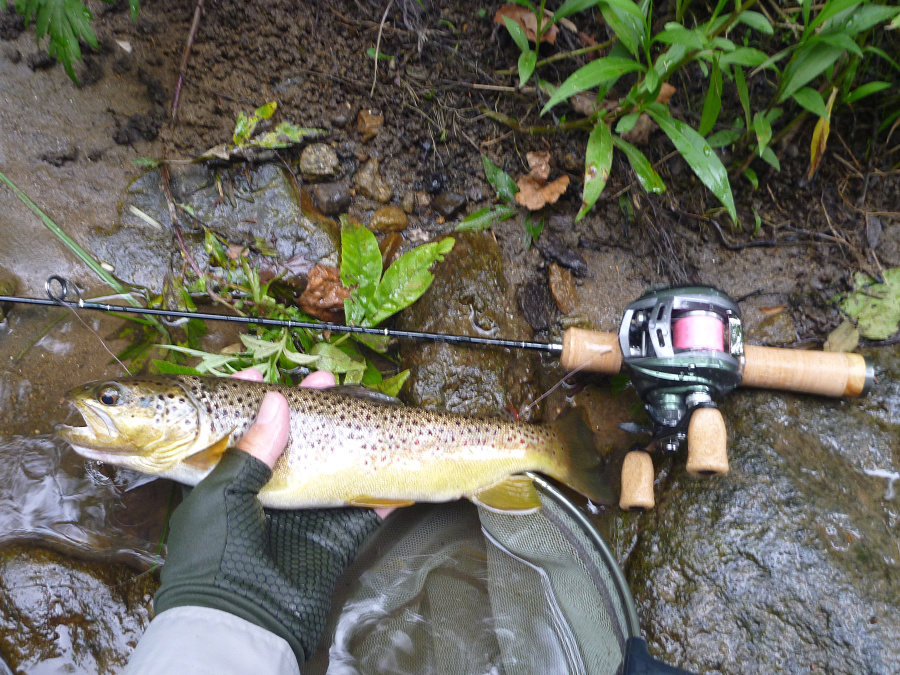 I spent most of the day fishing with a Tenryu Rayz RZ39LL. Wait! The photo above clearly shows a BFS reel! A baitcaster? On a spinning rod? Heresy!

Regular readers of the TenkaraBum site know that I don't always play according to Hoyle. I would be very happy to fish a BFS reel on a Rayz 3'9" baitcaster if Tenryu made one but they don't. 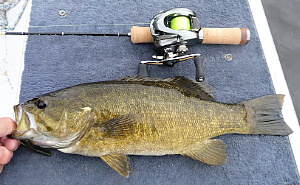 The first time I mounted a BFS reel on the RZ39LL (Maine smallie trip, 2017) I thought the length of the grip from the reel to the rod butt was really a bit too short. It's not. The best spin fisherman I know of uses a rod with a Tennessee grip and mounts his reel so that the rod butt is right at the heel of his hand. That way the rod butt doesn't get in the way and his wrist has full range of motion when executing an underhand cast. Having the rod butt right at the heel of your hand works the same way with a baitcaster.

There are a few things I've learned about fishing a BFS reel on an RZ39LL - or an RZI50UL-4, which I've done more frequently. (1). The guides being larger than you'd find on a baitcaster doesn't cause any problem - at all. The first guide on some spinning rods is too high. On the RZ39LL and RZI50UL-4 it isn't. (2). You don't really need a trigger grip. I have yet to let go of the rod while casting and I seriously doubt that I ever will. (3) All the things that make the RZ39LL and RZI50UL-4  great rods with a spinning reel are just as valid if you use a baitcasting reel. 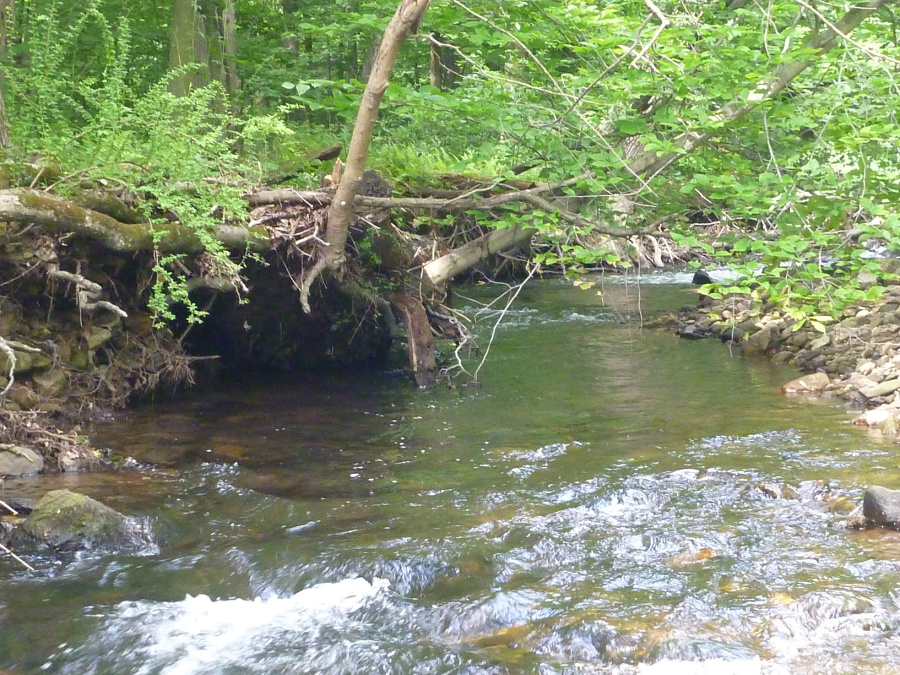 This is where you want an underhand cast.

One of things that makes the Tenryu Rayz RZ39LL a great rod is that it makes it extremely easy to do underhand casts. Underhand casts make it much easier to cast lures under overhanging branches. You know there are fish there but they are well protected (which is why they are there in the first place).

The rod was designed for use in a very narrow stream - so narrow there isn't room to use a longer rod. I have found, though, that even if the stream is wide enough to use a 5 foot rod, the shorter rod makes it easier to make short underhand casts, particularly if you need a low trajectory. Plus, of course, it's just fun to use.

On Friday, I also fished the RZ39LL as it was intended. The Shimano Soare CI4+ 500S is a good match for the rod. It's small and light weight. It doesn't have a huge line capacity, but on a small stream you don't make long casts and the fish don't make long runs. The reel holds 70 meters of 3 lb line, which is probably three times as much as you really need. I'm sure I've never made a 70 foot cast while fishing a small stream.

Most of my casts on Friday were probably no more than 30 feet, 40 at the outside. Casting into small bank eddies - often just open spaces between rocks - and then retrieving into the main part of the stream (which Angler Saito so often does) proved to be quite productive. I found it worked better with a minnow plug than a spinner or spoon, though. Casting into shallow water, the small, dense metal lures went to the bottom and got stuck between rocks too often. If you can start reeling the instant the lure hits the water you will save lures. The time it takes to close the bail on a spinning reel before reeling can be too long, though. It has to be instantaneous. At least on Friday, the minnow plugs never got stuck. 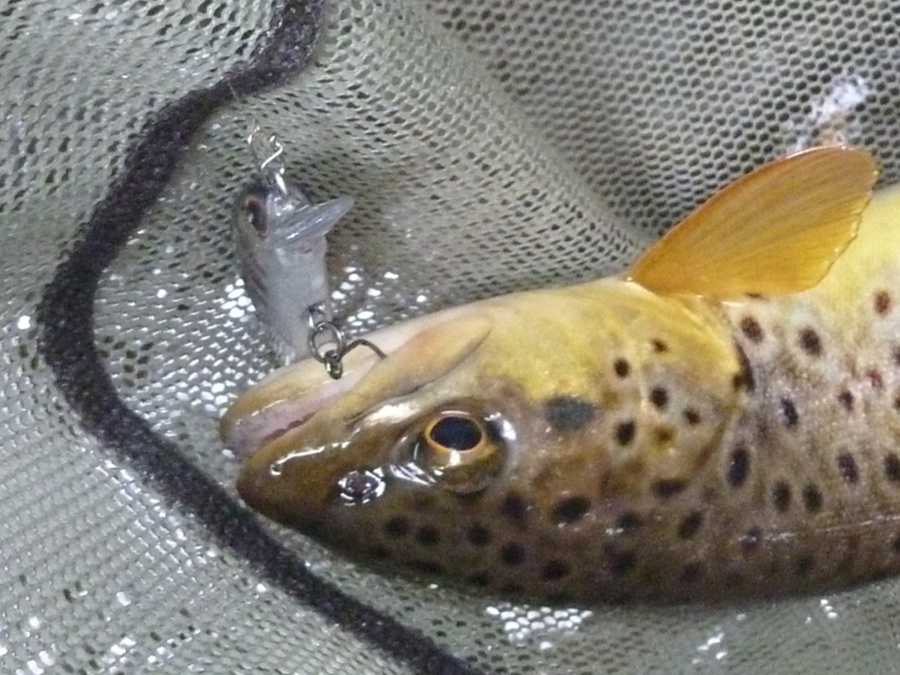 Hooked on the front hook.

The minnow plug I used was a Palms Alexandra AX50, a 4.5g sinking minnow, fished with a Tenryu Rayz Integral RZI50UL-4. I could have stayed with the RZ39LL, but I hadn't fished the RZI50UL-4 for a while. It's like getting together with an old friend you don't see often. You wonder why you waited so long. I really like that rod. It's just a bit softer than the Rayz or Spectra two-piece rods.

When I decided a couple years ago to no longer fish with treble hooks, I replaced the trebles on my plugs with single hooks. I removed the front treble and replaced the rear one with a C'ultiva SBL-55M. After fishing with the Alexandra AX50, I now think that was a mistake. On Friday, I caught enough fish with the Alexandra AX50 to lose count (I usually lose count somewhere between five and ten fish). Most were hooked on the front hook, not the rear hook. If you are fishing in one of the few places that require a single barbless hook, it would probably be better to leave the front hook and remove the rear hook. If where you fish doesn't have that regulation, leave both single hooks in place.

Everything worked Friday: Daiwa, Shimano and Forest spoons, Daiwa and Palms spinners, and Palms plugs. BFS and spinning. It was a very good day.

I don't know how many fish I caught. More than I have for a long, long time. All were caught with barbless hooks. I missed more than a few hits and I had lots of fish come unhooked because of the barbless hooks. Still, I caught lots of fish. I also learned a valuable lesson - unhook the fish while it is still in the net! I was holding a fish for a photograph and it wriggled/slipped out of my hand. In an instant, it was hanging from one hook and the other hook was embedded in my finger.

Ten inches of wriggling trout suspended by a hook in your finger is unpleasant, to say the least. The friend I go to Maine with every year had that happen with a ten inch bass, but that hook was barbed. He managed to unhook the bass but it took an ER nurse to unhook my friend. Once I unhooked the trout, unhooking my finger was easy. A few weeks ago I wrote that I was thinking of replacing some of my barbless hooks with barbed hooks. Uh, maybe not. I would bet that from now on, every time a fish wriggles off a barbless hook, I'll remember hooking my finger - and not going to the ER.

Today I received the following email:

"After reading your article about putting a baitcaster on a spinning rod I decided to give it a try with the Spectra 5'1"...this is now my favorite rod and I can switch and put a spinning reel on it as well to fish lighter spoons (have a hard time with baitcaster and light spoons)

This is a very small stream that does have some nice wild browns...it gave the rod a serious workout but managed to get it in...caught it on one of your Daiwa plugs...heavier rainbow one." 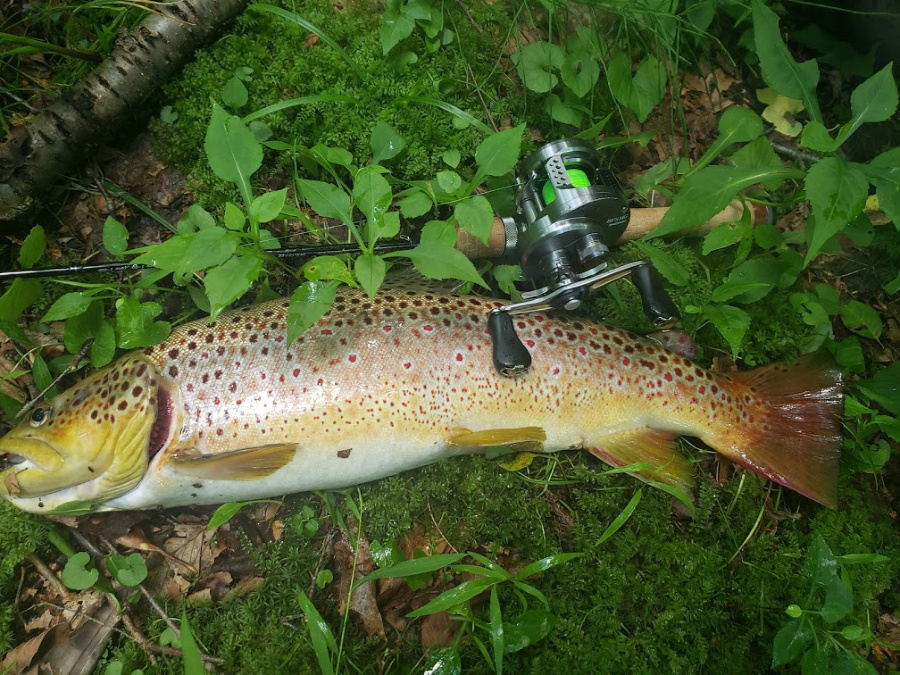 The angler who sent me the above comment and photo bought a Spectra RZS51LL-BC so he wouldn't have to switch reels!

After putting a Calcutta Conquest BFS  reel on my Spectra RZS51LL to get a good sense of the rod as a baitcaster (the spinning and baitcasting versions use the same blank), I bought the baitcaster version myself.