We don't have Aji in our harbors, but we do have snapper blues, which are probably just as good. 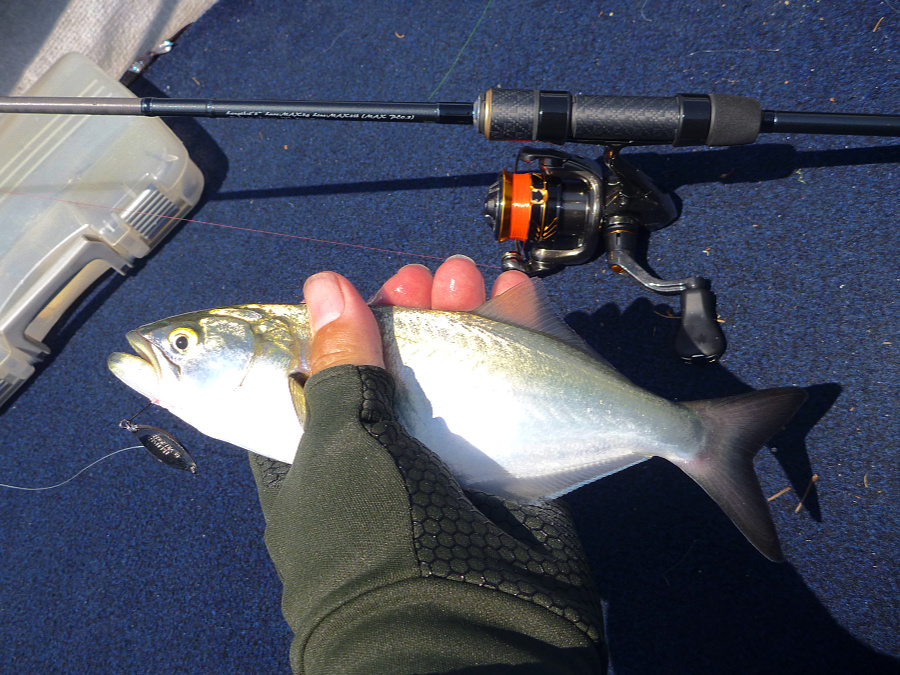 When I mention to people that the Tenryu Lunakia rods are ultralight saltwater rods I occasionally get blank looks, as if "ultralight" and "saltwater" are two words that do not belong in the same sentence. Those people must never have fished for snapper blues.

Snapper blues are young bluefish. From late July through September, they abound in bays and harbors all up and down the east coast. While many a fish will eat anything that will fit in it's mouth, that is not a limitation for bluefish. If something won't fit in it's mouth it will bite it in half!  For snapper blues, one of the primary foods is spearing (the common local name for Atlantic Silversides). Spearing abound in bays and harbors, which is probably why snapper blues are found there, too.

Although spearing will reach up to 6" long, all the ones I saw in the shallows at the boat ramp and just off the mouth of a stream that flowed into the western Connecticut harbor we fished appeared to be 2-3 inches. A 2-inch silvery fish is almost perfectly imitated by a silver spoon.

On Sunday, I used a Shimano Slim Swimmer 2.5g silver spoon and a Smith Edge Diamond Silver Yamame 3g spoon. Both worked very well, but if there is any fish that is better able to wriggle off a barbless hook than a 6" brook trout, it has to be a 6" snapper blue. 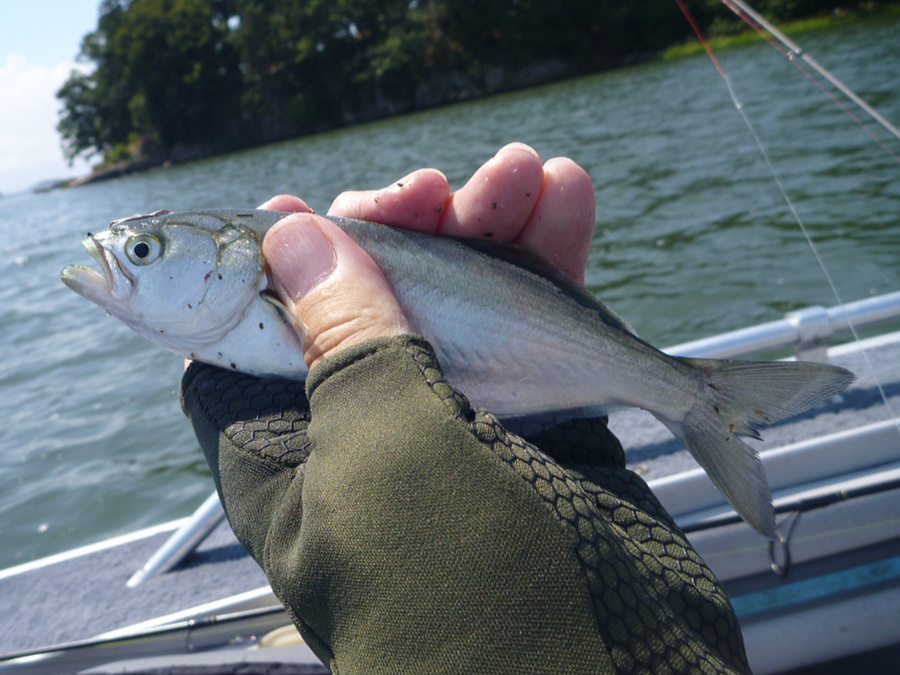 The Shimano spoons come with a barbless hook. With a Shimano Slim Swimmer spoon I was able to get several snapper blues into the boat, but I didn't have to unhook even one of them. Just after I swung them out of the water and into the boat, they were off the hook and flopping at my feet. 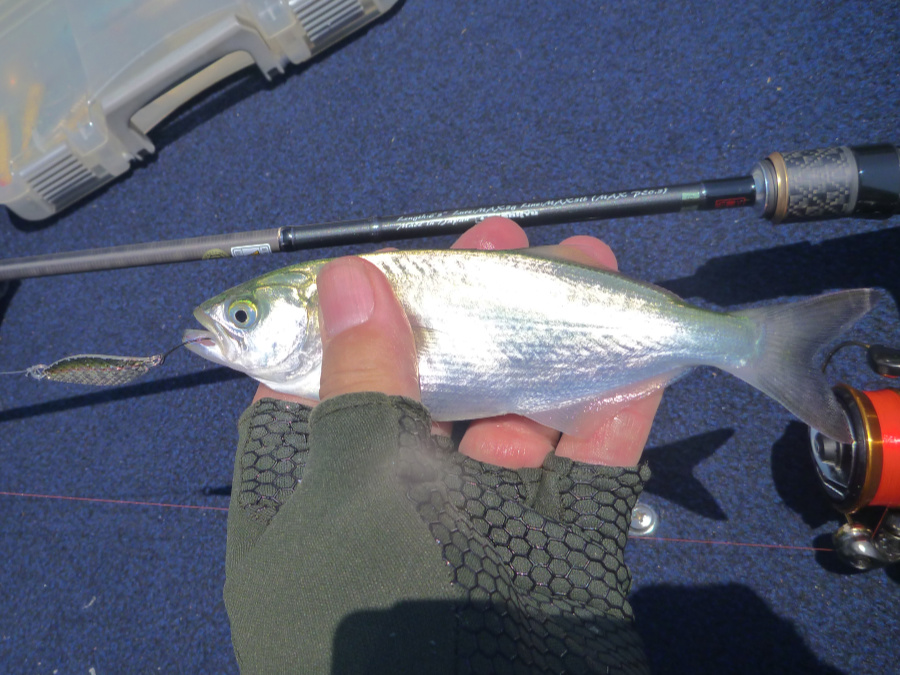 Before long, I switched to a Smith Edge Diamond Silver Yamame spoon. I got more hits on the Shimano, which is completely silver, but I got more fish in the boat with the Smith, which has a micro barb hook.

The Tenryu Lunakia LK632S-LMLS proved to be a great rod for snapper blues. With the solid tip, it seems more like an Ajing rod than the tubular-tipped Lunakia LK6102S-MLT, which is more of an all around Light Game rod (neither Ajing nor Mebaru, specifically). To get the full effect of the solid tip's sensitivity I tried fishing Ajing jigs but the snapper blues wanted flash. The spoons were very effective, the jigs triggered no hits at all. Perhaps I had the wrong plastics. Perhaps I didn't fish with them long enough. It is hard to be patient, though, when you have a different lure than you know is working that day!

On Sunday I fished from a boat, but you do not need a boat to catch snapper blues. If you can get to the head of a harbor or a bay where the water is perhaps 4-8 feet deep, you can find them. We saw several people fishing from shore near where the stream emptied into the harbor. My friend, who lives in the area, said he sees people there a lot this time of year. They wouldn't be there if the fish weren't there. 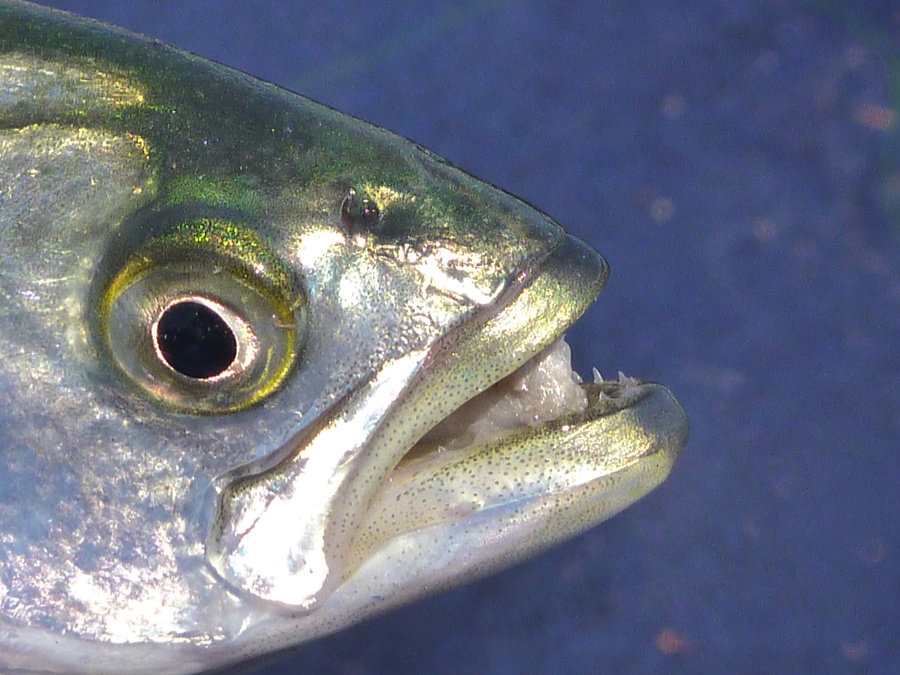 Teeth!
(And partially digested spearing, several of which ended up in the boat.)

Snappers are not as bad as larger bluefish, but be careful when handling them. They have teeth and they do bite. The bite from a snapper would hurt (a lot), a large bluefish can take a chunk of flesh out of your hand. Use clamps or pliers to unhook them.

(Olive is out of stock)