Several years ago I wrote a trip report for the TenkaraBum site entitled "Fish the Parks" about a trip to a Westchester county park.  This is a slightly different look at fishing parks, in this case office parks.

Many office parks have ponds. I suppose that is because offices are stressful and ponds are calming. I suspect many, if not most office park ponds - at least those not actively managed as koi ponds, hold bass and bluegills. I suspect most are not actually stocked, but the water has to come from somewhere and I would bet that in most places it isn't municipal drinking water. Realistically, how the fish got there is not as important as the fact that they are there.

Now obviously, office parks are all private and I am definitely not recommending that you fish on private land without permission. I'm not recommending it, but if you wanted to do it you probably could without being told to leave. Most office parks I've seen do not have "No Fishing" signs, and I've never seen an office park with a "No Trespassing" sign. I suspect if you fish on a Saturday or Sunday, no one will say anything. At least, that's been my experience. Coach fishes office park ponds a lot more than I do. He's never been challenged or asked to leave. However, if you are asked to leave, don't argue. Pack up and go, and don't go back.

On Saturday, Coach and I fished in three different office parks. Readers of the TenkaraBum site know of Coach, a friend with whom I often fish. (I call him Coach because he once coached his granddaughter in a kid's fishing contest and she won the prizes for both the biggest fish and the smallest fish.) Coach is retired, and he goes fishing about as often as younger guys go to work. I think he knows every body of water within an hour's drive of his house.

The first place we fished was in a small office complex. It has a relatively small pond that is completely hidden from the road. Clearly a case of "if you didn't know it was there, you'd never know it was there." It is just loaded with  bluegills and bass. 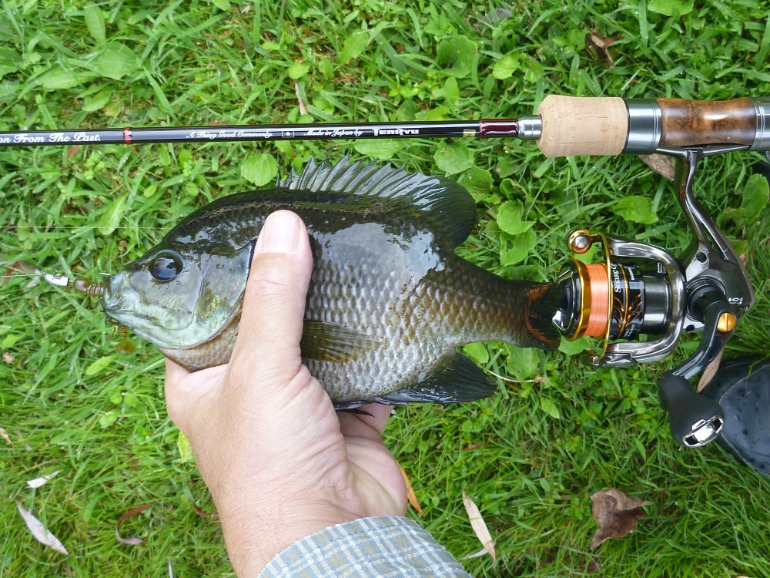 C'ultiva JH-85 Ajing jighead and a Ring Kick Tail. That combo has proven to be deadly on bluegills.

I started off with a C'ultiva JH-85 Ajing jighead and a Ring Kick Tail. That combo has proven to be deadly on bluegills and it didn't fail me on Saturday. It did not take long at all before I had my first fish of what would prove to be a many, many day. For readers who have not come to the Finesse-Fishing site from TenkaraBum, a "many" day is an adaptation of the simple, primitive counting system that consists of just four "numbers":  one, two, a few, and many. Since I usually lose count somewhere between five fish and ten, I adopted that system for counting fish "a few" years ago.

After a few bluegills on the jighead and kick tail, I switched to a floating Daiwa Dr. Minnow in an attempt to coax a bass into biting. 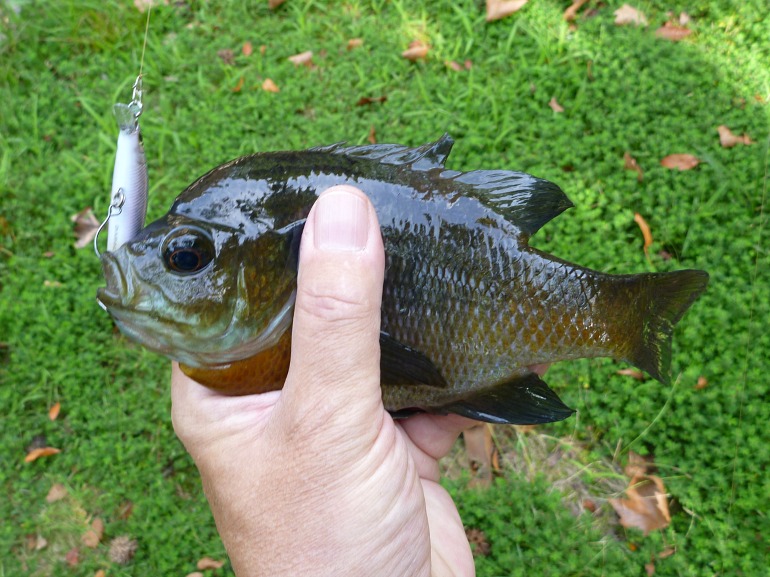 I just caught more bluegills. With their small mouths, they clearly couldn't engulf the lure like a largemouth bass does, but they would keep nipping at it until they hooked themselves on one of the two single hooks with which I replaced the factory trebles. 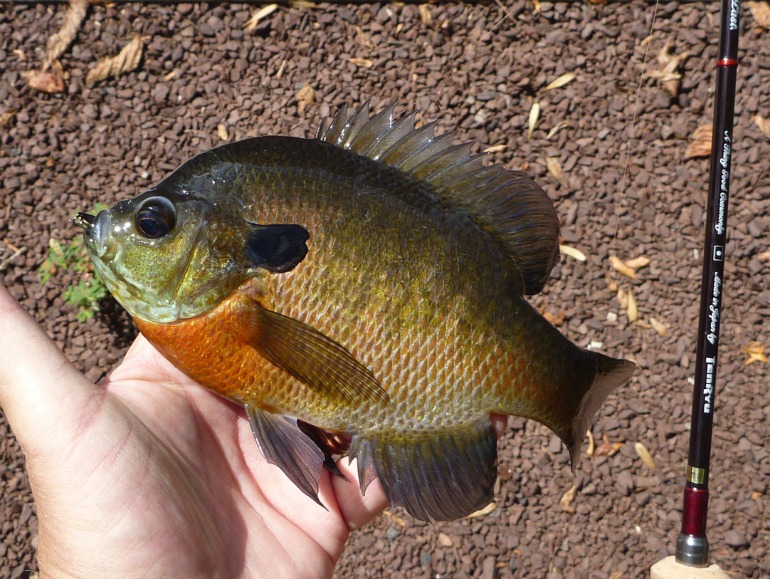 Although the Tenryu Rayz Alter RZA61L-T that I was using can cast the .4g Vega spoons, the .8g ones cast enough better that I reserve the .4g ones for fishing with a tenkara rod. The .8g spoons are stamped out of thicker metal but are the same size as the .4g spoons so they are just as attractive to bluegills and to small wild trout. (I will have Tenryu 3 wt. fly rods  in stock this fall, and I'm sure the .4g Vega spoons will do quite nicely with 3 wt. fly rods). 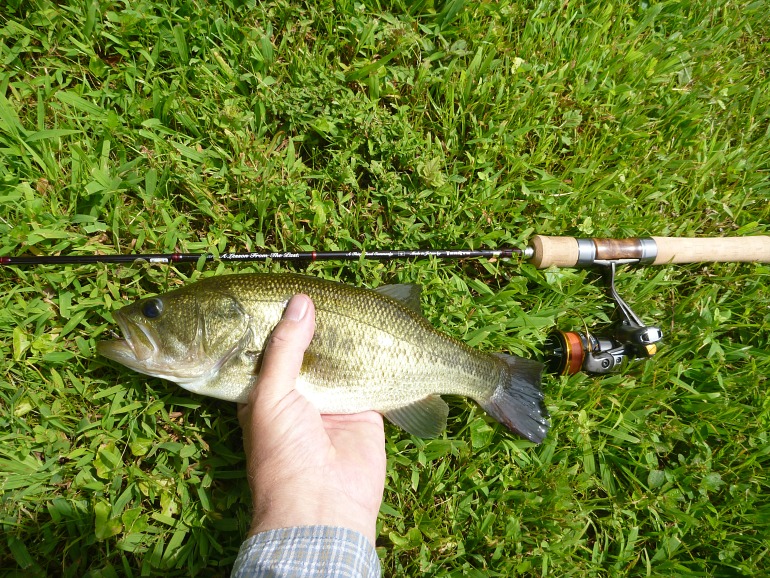 A largemouth gives the Tenryu Rayz Alter quite a workout.

I did manage to catch a few bass as well as the bluegills. None were huge, but this one was large enough that the fight was definitely a give and take. With a soft "Area" rod and 2lb test line, the drag got a workout.

The Tenryu Rayz Alter RZA61L-T is a rod designed for trout, but I've yet to catch a trout with it. It was designed for Areas (managed, pay-to-fish lakes), and the few times I've taken it out I have fished lakes, so I'm not entirely off spec. Even though I have not yet used it precisely for its intended purpose, it has already become one of my favorite rods. I really, really like the action  -  soft enough that bluegills put a good bend in it but with enough backbone to land respectable smallmouth bass when I used it in Maine. It protects 2 lb line well enough to catch modest bass, and with the 2 lb line it will cast lures as small as I want to use. With 4 or 5 lb line it would cast the heaviest lures I would want to use for trout.

I need to take it trout fishing. 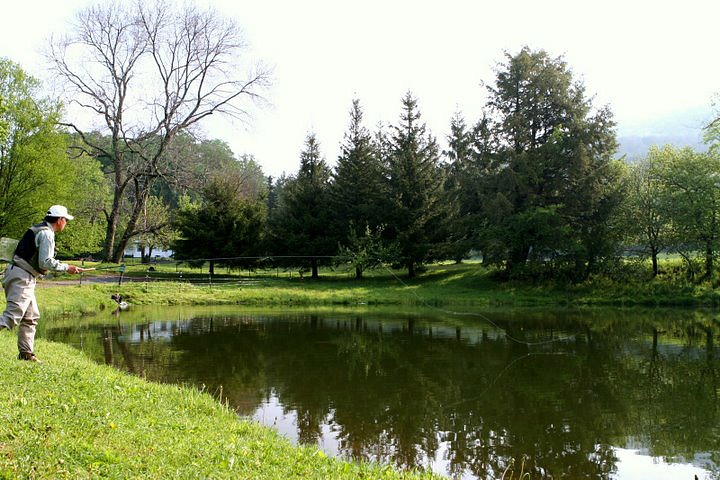 Dr. Ishigaki tenkara fishing in an "Area" in the Catskills in 2009

Come to think of it, I know a place in the Catskills that is exactly the kind of place for which the rod was designed! I just may have to go there!