The Daiwa Iprimi 56XXUL-S is a 5' 6" extra, extra ultralight solid-tipped spinning rod. It is a very soft, full flex rod that is rated for lures as light as .4 gram (about 1/70th of an ounce). When I first saw the rod's specs, my first thought was micro fishing, which has grown dramatically in the US in the last few years. 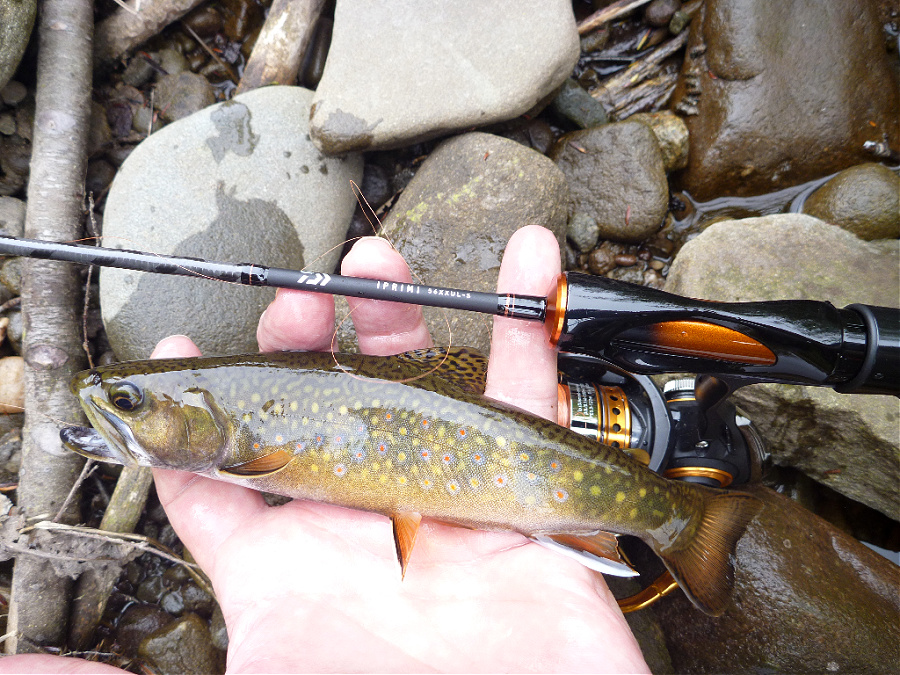 My second thought was brookies! Actually, most brookies aren't much larger than micros, and this rod makes catching small fish fun. At 5'6", the rod isn't too long for the little overgrown streams of the Appalachians, and it isn't too short for the beaver ponds and alpine lakes of the Rockies. The recommended lure weights of .4g to 2.5g cover the lures you would want to use for brookies, and the recommended line weights of 1.5 to 3 lb test cover the lines you should want to use for brookies.

Most ultralight spinning rods that are available in the US are overkill. Most are rated for lines up to 6 lb test. Personally, I would consider 6 lb line to be "light" rather than "ultralight." In any event, 6 lb line is too thick and too stiff to give good casting distance and good action with small lures. Realistically, even 4 lb line is too thick and too stiff. The 2.5 or 3 lb test Sunline Troutist Wild is the heaviest line I would use. I don't know about you but I've never caught a 3 lb brookie. You just flat out do not need heavier line. 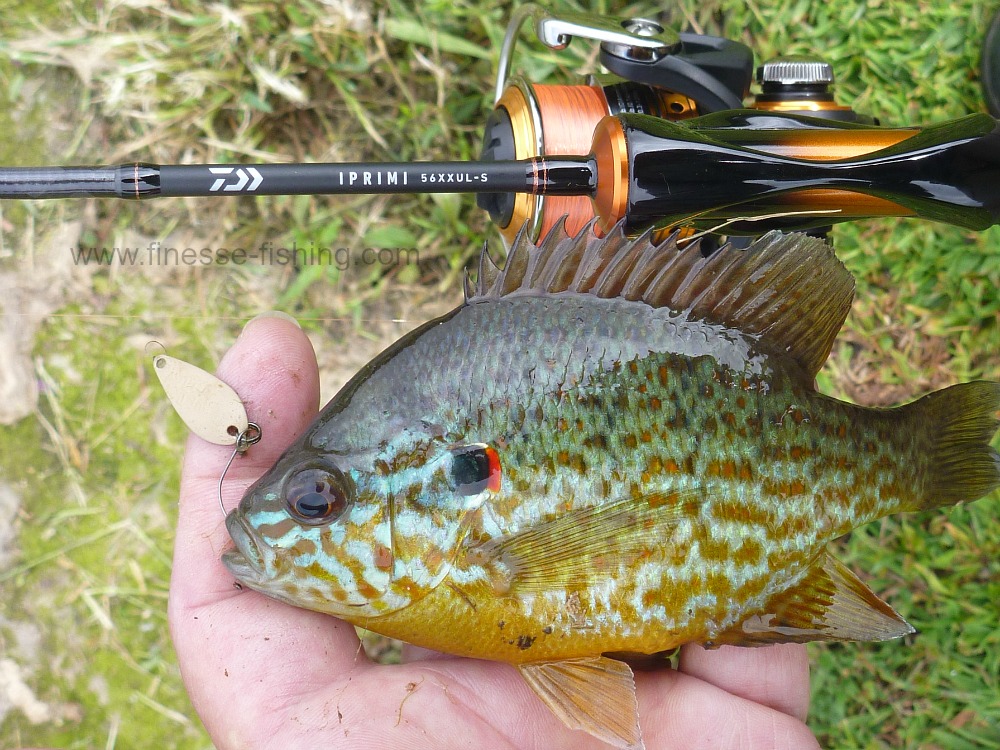 For that matter, I've never caught a 3 lb sunfish, either. Micro spoons, by the way, are extremely effective for sunfish. In my experience, the smaller the better. I've had wonderful luck with the .4g and .8g Daiwa Vega spoons (since discontinued). I have not had a chance to try the .5g Rodio-craft Blinde Flanker, the .6g Forest Chaser or the .6g Daiwa Micro Lumion for sunfish. I think the Micro Lumion spoons will prove to be killers for sunfish (and for brookies, of course). They are only 3/4 of an inch long and come in .6g, .8g and 1g weights. The 1g spoons in particular will cast very nicely with the Daiwa Iprimi 56XXUL-S. 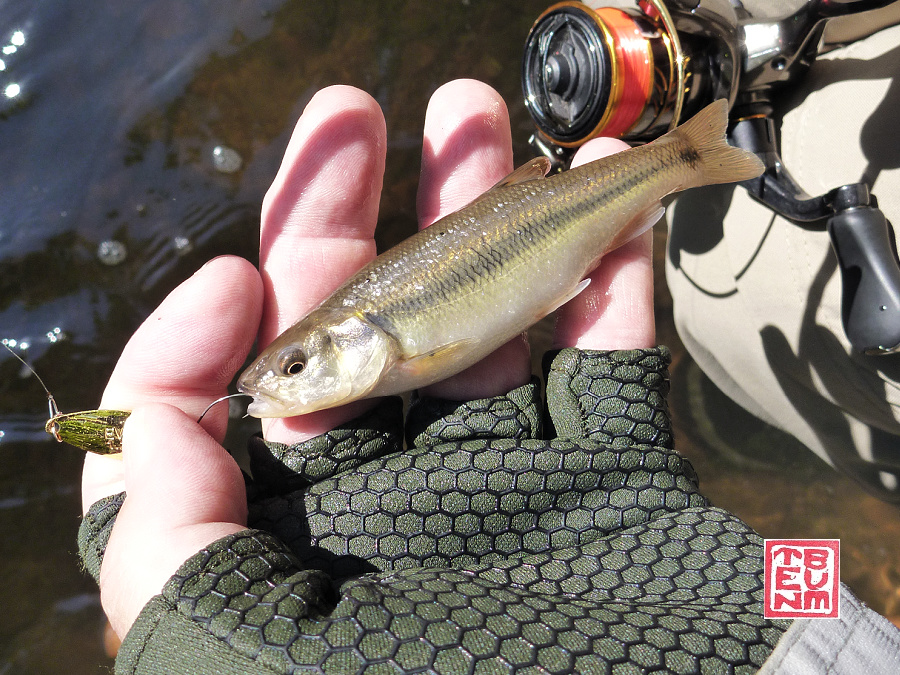 Another great thing about the Daiwa Iprimi 56XXUL-S, given its ability to cast extremely small spoons, is that you can fish those tiny little creeks that no one fishes - and catch fish. Even creek chubs will hit micro spoons!

The rod is rated for lures up to 3 grams, so even though you can fish the tiniest of lures, you don't have to. There is an excellent selection of JDM spoons and spinners that weigh 3 grams or less. Of course, if you fish larger lures you are likely to catch larger fish. I have caught fish on 2.5g spoons that were larger than I would want to tangle with using the 56XXUL-S, but the rod is more capable than you would expect an extra, extra ultralight to be. 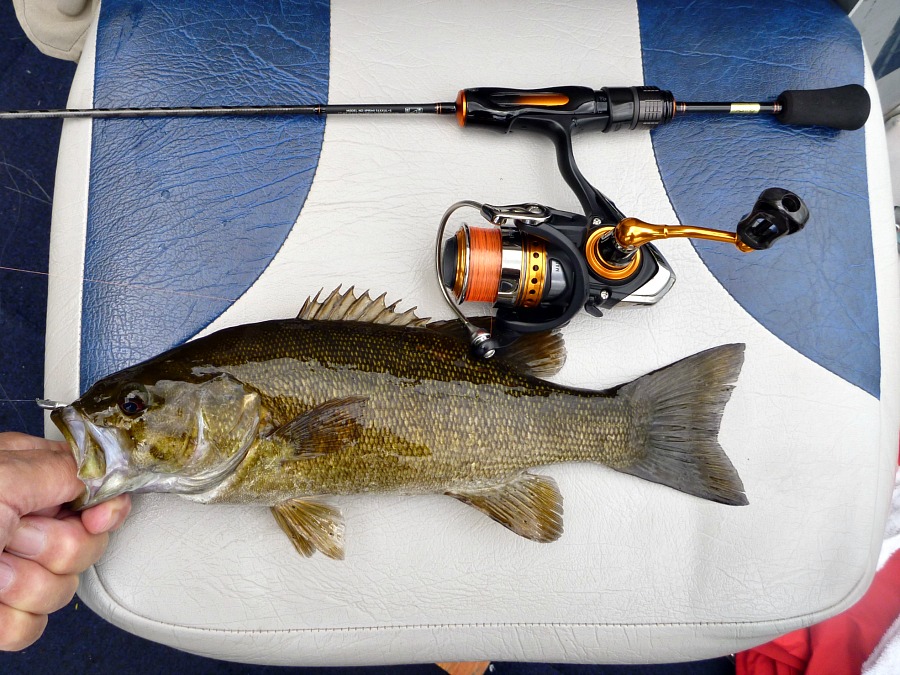 I took the rod to Maine a few years ago on my annual smallmouth bass fishing trip - just to see what the rod could do. It did just fine. It is not a rod to pull largemouths out of weeds, but in an open lake it will tire a pretty good fish.

The rod was designed for use in Areas, which are private, managed, pay-to-fish lakes. Some of the trout in the Areas are surprisingly large but they are also heavily pressured.  Anglers routinely use small lures and very light lines. To protect the light lines, Area rods tend to have very soft actions and the Daiwa Iprimi 56XXUL-S is no exception.

Actually, it is exceptional in one respect, and that is the length. Most Area rods are 6' long or a bit longer. At 5'6", the 56XXUL-S is one of the shortest rods intended for fishing Areas. That short length, combined with the extra, extra ultralight action, makes it one of the best rods for the headwaters streams here in the US, where the brookies or rainbows or browns are not going to be very big (but they probably will be very hungry).

I recently watched a YouTube video of a Japanese angler fishing a mountain stream for trout using an Area trout rod and a Smith AR-S spinner, which is also intended for fishing in Areas. The combination was very effective.

For the longest time, I had thought rods intended for native trout in streams had firmer actions because you had to fight the current as well as the fish. I now think that the firmer action is primarily because of the lures most Japanese anglers fish in streams. By far, most fish heavy sinking minnow lures, which are frequently twitched on the retrieve. Twitching a 4.5g sinking minnow takes a relatively firm rod tip.

A spinner is fished with a steady rather than a pulsed retrieve. Thus, a rod for fishing spinners (particularly a 1.5 or 2g spinner like the single hook Smith AR-S) does not need a stiff tip. An XUL or XXUL Area rod works just fine for fishing small spinners in a stream for wild trout, as long as the trout aren't too large or the current too fast.

I had previously seen a video of the same angler, using the same rod, fishing for trout in a mountain stream with micro spoons. As with a spinner, fishing a small, light spoon with a steady retrieve does not require a stiff rod tip. The Daiwa Iprimi 56XXUL-S (Area rod) is perfectly capable of fishing streams for trout using a Smith AR-S spinner or micro spoon (Area lures). 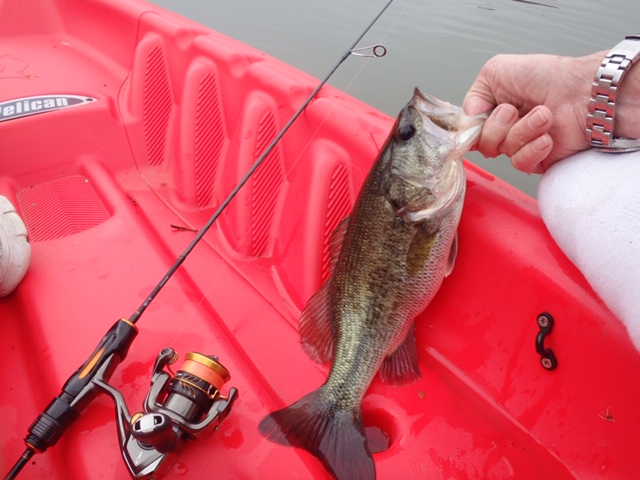 Pete L sent in this photo showing a 16" bass he recently caught with his Daiwa Iprimi 56XXUL-S. He wrote "Took her out today testing three # test and 1/32 and 1/16 oz jig flies.  She handled this 16” bass.  Fought like a champion with her tip bent to the reel!  That would have been a ho-hum fish with normal gear.  It was an exciting 8-10 minute battle and A BLAST!  Later two crappie just for fun.  Light fly fishing and these XXUL rods are a perfect combo.

Thanks for introducing me.  I’m a warm water fisherman having a ball. 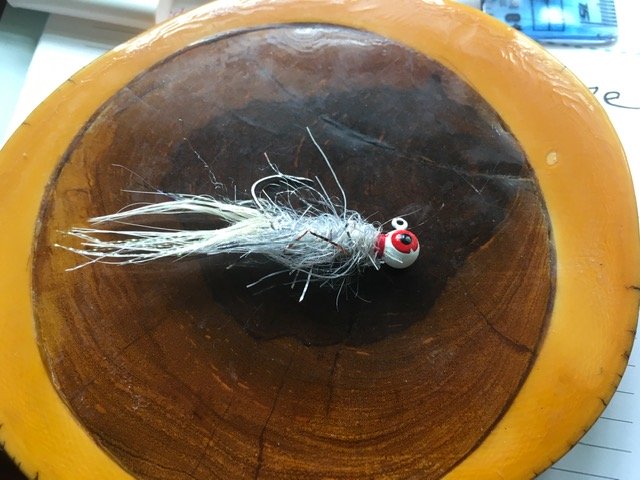 One of Pete L's "Jig Flies"

Pete's Jig Flies reminds me of Joe Robinson's "flures," which he defined as a cross between a fly and a lure. Joe's book "Piscatorial Absurdities" championed the use of a soft spinning rod with line of 3 lb and under. A fly tied on a light jig head casts well, doesn't make a huge splash on entry, and catches fish. A rod designed for 3 lb line, micro spoons, small spinners or light jigs makes catching those fish more fun.

The rods Joe Robinson described in his book were all custom made. You can't buy an off-the-shelf rod in the US that is actually designed for line of 3 lb and under. Seriously, the closest you will find is designed for lines of up to 6 lb (and if they are US lines rather than JDM lines, in reality that means 8 lb test or more).

To truly get a sense of what ultralight, true ultralight, spin fishing is all about, you really do need to use a 2 to 3 lb line and a rod that was actually designed for 2 or 3 lb line. The Daiwa Iprimi 56XXUL-S is a great place to start.

I received my Iprimi and other gear today. I couldn't be happier! Customary second order has already been placed. I cannot wait to fish tomorrow! Amazing. It feels so good to hold a spinning rod again!

Thank you a million times over for putting Finesse-Fishing together.