Spin fishing for trout in Japan is divided into "Native" (also called wild or natural) fishing in mountain streams and "Area" fishing (stocked, managed trout ponds). Some Areas are on streams, but the streams are a series of man-made pools constructed by building rock dams across the stream at intervals. Fishing the pools is essentially the same as fishing in a lake - there are no obstructions and minimal current.

There will be a gap between the sections.

For all the rods, though, there will be a gap between the sections. It is supposed to be like that. Please don't force it.

The rods used in Japan for fishing in streams are firmer and more tip flex than the Area rods. Even though the fish that are caught in Japanese streams are almost always much smaller than those caught in Areas, anglers have to deal with the current, which is often swift in the high-gradient mountain streams. Also, keeping fish out of snags is a concern in wild streams but not in managed trout ponds.

The lures also tend to be different. Many anglers use micro spoons in the Areas and "minnow" lures in streams. They look similar to the familiar Rapala, but they are primarily heavy, sinking minnows weighing over 1/8 oz. Although spinners are extremely popular in the US, they are not popular in Japan. They do exist, but they aren't very popular.

I learned from talking to Japanese anglers that they feel catching trout with spinners is too easy. They impart action to their minnow lures, and learning what the fish want that day with respect to the strength and frequency for the rod tip twitches and jerks is seen as a challenge that makes trout fishing more interesting. I truly believe they would prefer to catch ten hard won trout than ten times that many if they came too easily. 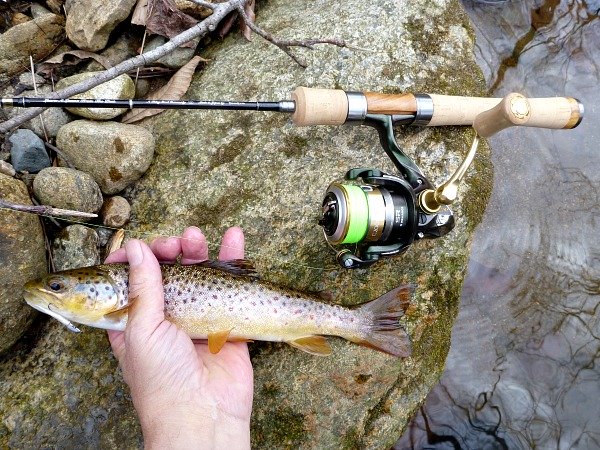 Whether you prefer spinners, spoons or plugs, though, the JDM spinning rods for wild or native trout would be a better choice than the Area rods for stream fishing here in the US. Stream anglers here face the same challenges with current and snags as the Japanese anglers do, plus one significant challenge that most Japanese anglers do not face - the possibility for big fish!

There is one notable exception, though, and that is when fishing a relatively small, relatively gentle stream for smaller fish. One of my favorite streams is pretty low gradient, and nearly all of the fish are in the 5 to 7" range. Micro spoons are very effective at catching them, and an Area rod does very nicely with the smaller lures and smaller fish.

The best stream spin fisherman I know of is Frank Nale, who lives in south-central PA. He regularly catches wild trout over 16" - which for most anglers in Japan would be the catch of a lifetime. Granted, he doesn't catch fish that size on every outing - or even every other outing, but nearly every outing at least offers the opportunity for a large fish. An Area rod can certainly tame a 16" fish in a lake with few obstructions, but in a river with current, not to mention rocks and logs, the firmer backbone of a native trout rod would be better - for hook sets as well as controlling and then netting the fish.

The Tenryu Rayz Integral RZI50L-4, are four-piece "travel" rods. I call them four-piece "convenient" rods! One of the things I have definitely gotten used to with my tenkara fishing over the past ten years is the extreme convenience of having a rod that collapses to about 20" or less. You can carry them very easily strapped to a backpack, and some collapse down to a length that will fit completely inside even a modest day pack. The Tenryu Rayz Integral rods break down to just over 16"! They will fit inside a backpack (and in your carry-on bag)!

For some reason that I do not understand, people seem to have a bias against multi-piece rods. Fifty years ago, when rods were glass and ferrules were metal, that feeling made sense. Now? Not so much. Technology has moved on and modern multi-piece rods are excellent. I guess my feeling on that also comes from fishing with tenkara rods, which often have 8 or 9 sections, and keiryu rods which may have 13 sections or more. They cast just fine. They fight fish just fine. It is the same with the Tenryu Rayz Integral 4-piece rods - they are wonderful rods that cast and fish just fine. And they are so much more convenient than even a 2-piece rod that if you try one you may never go back. 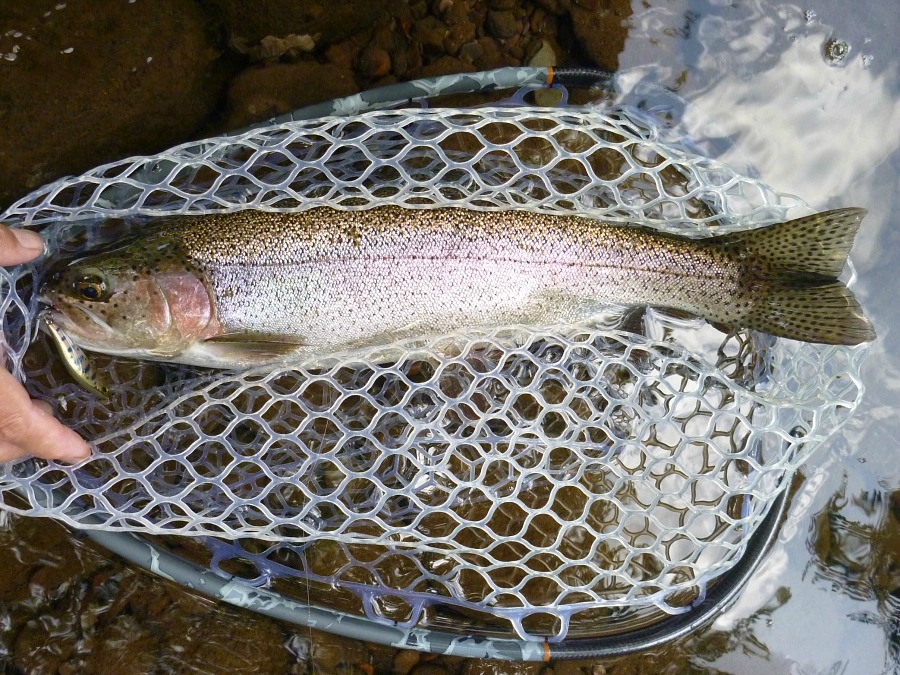 Many of the JDM spinning rods designed for stream fishing are short, with 5' to 5'6" being common lengths. When fishing smaller streams, a shorter rod is easier to maneuver and easier to cast accurately. While there are a few Area spinning rods of that length, they tend to be limited to lure weights of less than 1/8 ounce. Thus, the Area rods don't give you what you will want for stream fishing - the backbone to give you solid hook sets and keep a fish away from logs and branches and the ability to fish heavier plugs.

The JDM trout rods definitely are not "all around" or "one-size-fits-all" rods. They are designed for a specific purpose - but for that purpose they are just wonderful tools.

"Areas" are pay-to-fish stocked trout ponds. There are a few of those in the US as well, but they aren't that popular. In Japan, where there are lots of anglers and not a lot of places to fish, they are quite popular and fishing pressure is intense. Some Areas also have stocked streams, but ponds are much more common.

Just as bass anglers' need for greater finesse gave rise to the Bait Finesse System, Area trout anglers' need for lighter lures and lighter lines has given rise to the XUL (extra ultra light)  Area trout rods. They have a more progressive bend, in part for casting the light lures but even more for protecting the hair-thin lines. The rods and reels are rated for lines down to 1#  and lures down to .4 gram - less than 1/64th ounce.

Although pay-to-fish trout ponds are not popular here, there are thousands of lakes that hold trout, and the Area rods are perfectly suited for them. For that matter, there must be hundreds of thousands of ponds and lakes that hold sunfish and crappies, and the Area rods are perfectly suited for them, too! And if you happen to hook a bass? If you are fishing open water, the rod will do its job and tire the fish. I've caught lots of smallies in Maine on 2 lb line.  However, if you are fishing with a soft Area rod and very light line around heavy cover, all I can say is I wouldn't use expensive lures.

The "Area" rods, designed for fishing lakes, are softer rods than their stream counterparts. Because you don't have to fight the current as well as the fish, you don't need quite the backbone you do for a stream rod. The progressive bend and a reel with a good drag will subdue good sized fish faster than you would imagine. They are soft enough, though, that they won't rip lures out of the papermouths. 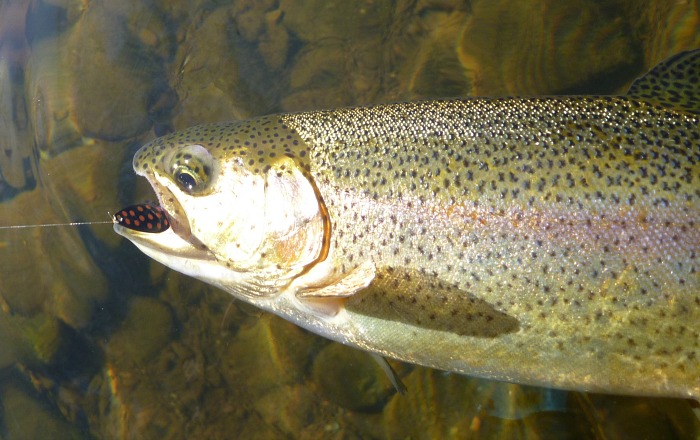 There is another reason for the difference in Native and Area rods. In Japan, the most popular lure for native trout is a sinking minnow lure. The most popular lure for fishing in areas is a micro spoon. A rod designed for twitching a heavy sinking minnow needs to be firmer, and have a firmer tip in particular than a rod designed for fishing a micro spoon with a steady retrieve. 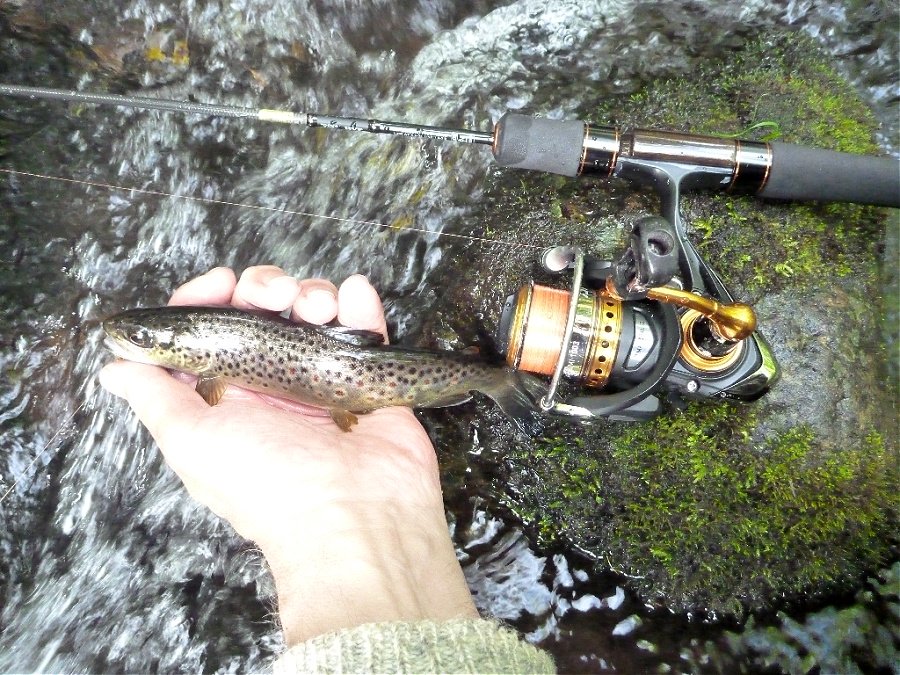 I have tried it myself with a Daiwa Presso ST. An Area rod is perfectly capable of fishing micro spoons and small spinners in mountain streams. If the fish aren't too large and the current not too fast, an Area rod is not only extremely effective it's a lot of fun.

I have been a bit surprised at how micro fishing has taken off in the US (pleasantly surprised, because I sell micro fishing hooks for bait fishing). Most people who are getting into micro fishing use spinning rods rather than dedicated micro fishing rods like the tanago rods used in Japan.

Even ultra light spinning rods are overkill for really small fish. If you fish small streams for small fish, consider the Daiwa Iprimi 56XXUL-S which is rated for lures as light as 4/10 of a gram (about 1/70 ounce)! Small fish are in almost every body of water. You don't have to book a trip to Patagonia to find them. With the right gear (a very light, sensitive rod) even the small sunnies in the town park are a lot of fun! 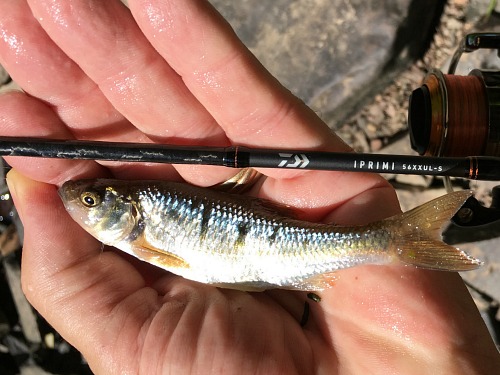 If you wanted a rod that could cast lures small enough for the common shiners in that little creek that no one ever fishes, this rod will do it and do it nicely.

Ajing and Mebaru rods are covered in much greater detail on the Ajing and Mebaru Rods page, but as a brief introduction, they are designed for ultralight salt water fishing. Although most anglers in the US wouldn't think that "ultralight" and "salt water" even belong in the same sentence, it is quite popular in Japan.

Aji are what we would call horse mackerel, and Mebaru are fairly modest sized sea bass. The fish are different, so the rods are different.

Aji are open water fish and are constantly swimming. If a school happens to come up on your lure from behind, it is very likely that one will take it and keep swimming towards you. That is a very hard bite to detect, so ajing rods are extremely sensitive. They are relatively stiff rods (to be sensitive) with soft tips (to protect a very light line). 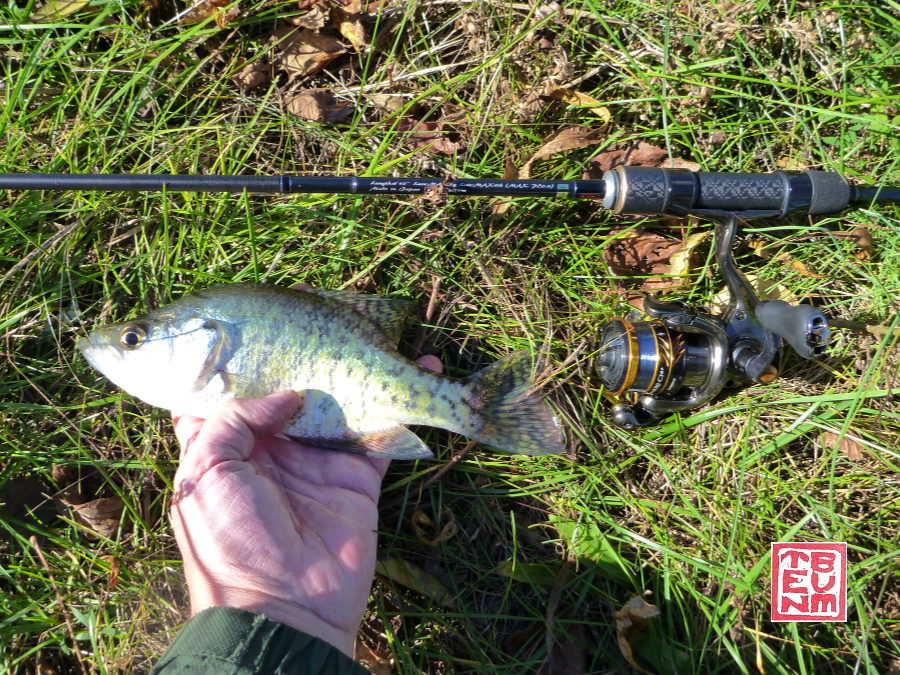 Ajing rods are quite popular in the US, but not for mackerel fishing! They are used primarily for bream,  fishing with light jigs and small plastics. The same ajing jig heads and plastics used in Japan for aji work very nicely here for sunfish of any variety.

Mebaru live around the rocks on the bottom. The rods used to catch them are softer and more mid flex than the ajing rods. Mebaru are not large, and the lines used to catch them are light. People here in the US use mebaru rods primarily for crappie fishing. The softer rod is a better choice for crappie as it is less likely to rip the hook out of the crappie's tender mouth.

The Tenryu Lunakia LK6102S-MLT was designed to work well for both aji and mebaru. It is a bit softer and not quite as fast as an ajing rod, and just a bit stiffer and faster than a mebaru rod. If you want one rod for crappies and bream (and smallmouth, and white bass and, ... and ...) it would be a good choice. The shorter Lunakia LK632S-LMLS is an ajing rod (but it's still a lot of fun with sunfish).