A few weeks ago I went to Colorado to meet with the Tenryu people manning their booth at the International Fly Tackle Dealers Association trade show in Denver. I stayed a few extra days and fished with Adam Klagsbrun in and around Boulder CO.

I was eager to fish with him for two reasons. He told me he had figured out how to do a very easy flip cast that was extremely accurate, and I wanted to learn it if I could. Also, he had recently gotten a spinning rod from Anglo & Co in Japan, which I wanted to see.

Earlier this year I had asked Anglo & Co if I could become a dealer for them here in the US. They told me they were too small and had no excess capacity, so no deal was done. Their rods sell for about $700 and up (with a 4-month waiting list), so I probably wouldn't have been able to sell many anyway - but I did want to see Adam's. 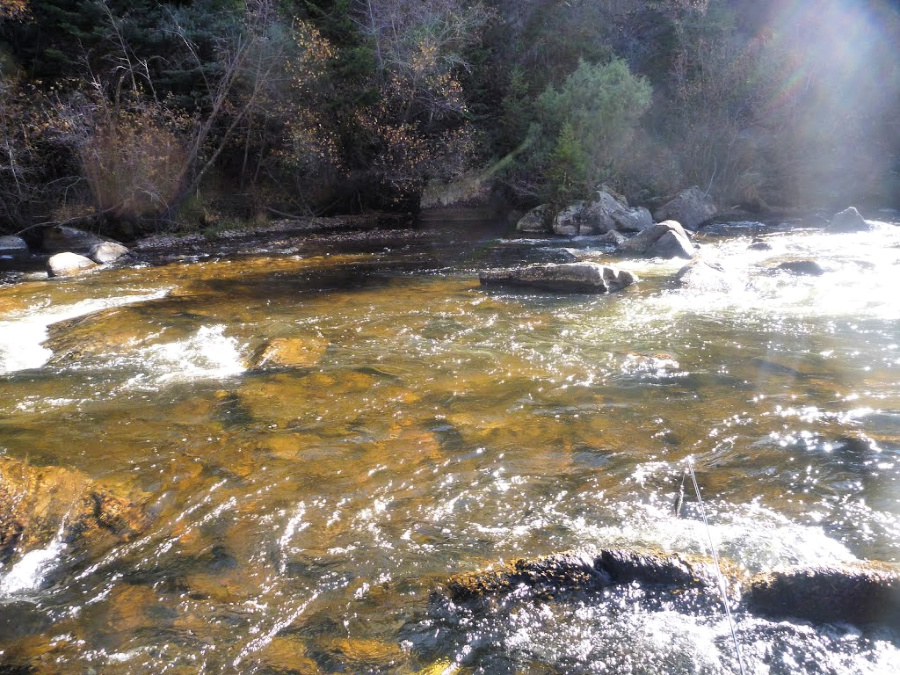 When we got down to the stream, Adam showed me his flip cast. My understanding of how he did it had been close, but not exact, and the difference was crucial. With a flip cast, the rod is held directly in front of you. Start with a sharp (but short!) upward motion of the rod and then a more forceful sharp downward motion with your wrist. When your wrist motion stops abruptly, the momentum of the lure bends the tip further down and back, loading the rod. A very slight forward push with your hand loads the rod a bit further (because the lure's inertia holds it back very briefly). You release just as the rod tip starts to recover. If you have timed your release perfectly, the lure will shoot towards your target with a very flat trajectory.

The part I hadn't understood was the slight forward push. I had been trying a slight upward motion, which generally caused the lure to go much too high. Also, my release had generally been a fraction of a second too late.

The big advantages of a flip cast are: 1) there is very little movement of the rod and your arm, so you are much less likely to scare the fish you are trying to catch; 2) done well, the cast can deliver the lure under overhanging tree branches; 3) because your rod starts out pointing directly at your target, your cast should always go directly towards your target. Distance and elevation take practice, but side to side accuracy (windage) should be right on almost from the very beginning.

A good flip cast takes a lot of practice (timing the release is absolutely critical). I didn't get the timing right for every cast, but I got it right often enough to understand what I needed to do and what I needed to practice. The best part of the lesson (at least for me) was after making the cast correctly a few times with his Anglo & Co rod, I was able to pick up my Tenryu Rayz Integral RZI50UL-4 and do the exact same cast.

In addition to getting the timing of the release just right, you also have to have a rod that is soft enough to load with just the quick downward wrist flick and slight forward push. The RZI50UL-4 worked just fine. Not to mention (OK, I'll mention it), the Tenryu Rayz Integral RZI50UL-4 is about half the cost of an Anglo & Co rod and there's no waiting! 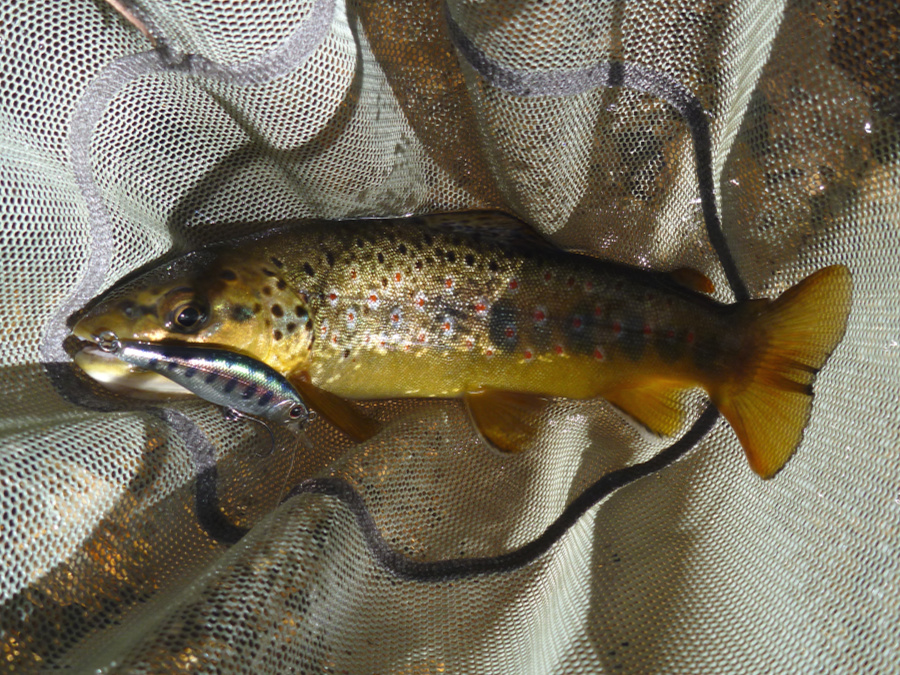 Although the Tenryu RZI50UL-4 is rated for lures as light as 1 gram (roughly 1/32 oz), you will need a heavier lure to make the flip cast that Adam taught me. The key to the cast is loading the rod with the sharp downward motion, and a light lure doesn't have enough mass to bend the rod tip enough to load the rod. A lure like the 4.5gram Palms Alexandra AX50 or Daiwa Silver Creek Minnow 50S is about right.

A lure of about 4.5g also allows you to make longer casts, so you can target the bank eddies on the far side. If you can get the lure deep into a bank eddy, it probably won't land directly on top of a fish, scaring it, but will allow you to fish the seam between the eddy and the main current, as well as the full width of the stream. In a stream like the one we fished, with lots of large rocks both above and below the surface (top photo), you could pick up a fish about anywhere along your retrieve. 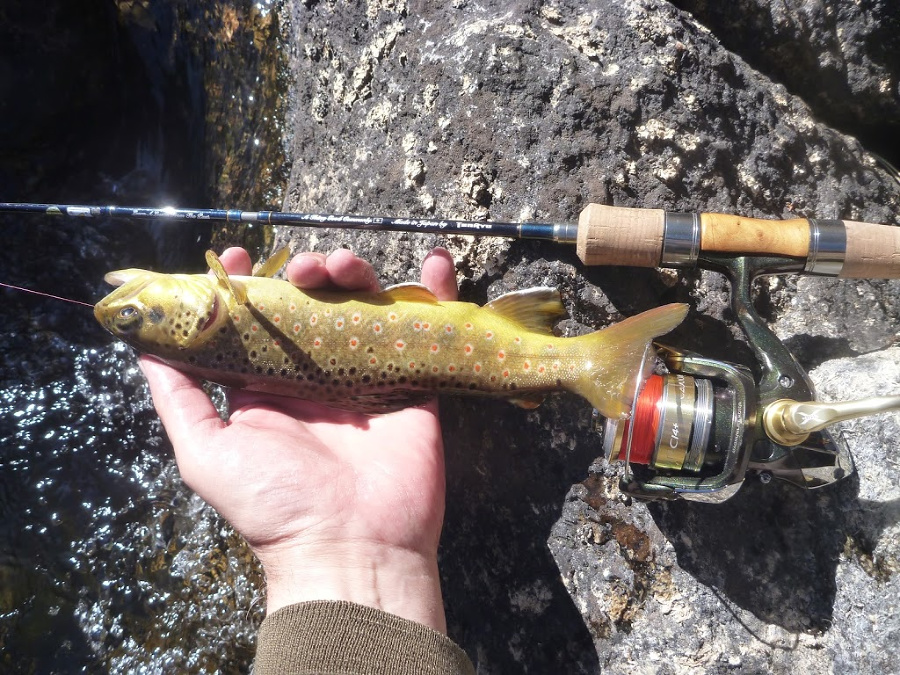 We both caught a lot of fish. I generally lose count somewhere over five. I kept catching fish after I lost count, so it qualified as a "many" day. (My simplified counting system for fish is 1, 2, a few, and many.) The best part of the day was learning and practicing the flip cast - and having it produce fish. The worst part of the day was that long, steep hike back out of the canyon.

The following day we fished a stream that was essentially just a series of pools. The stream did not offer many bank eddies on the far side, but I still tried to drop the minnow plug as close to the far shore as I could. In the past, I have lost a fair number of spinners and spoons doing that, but minnow plugs (even sinking minnows) don't seem to go directly to the bottom and catch between rocks like the spinners and spoons do. That may be another reason Japanese lure fishermen prefer minnow plugs to either spinners or spoons when fishing mountain streams. 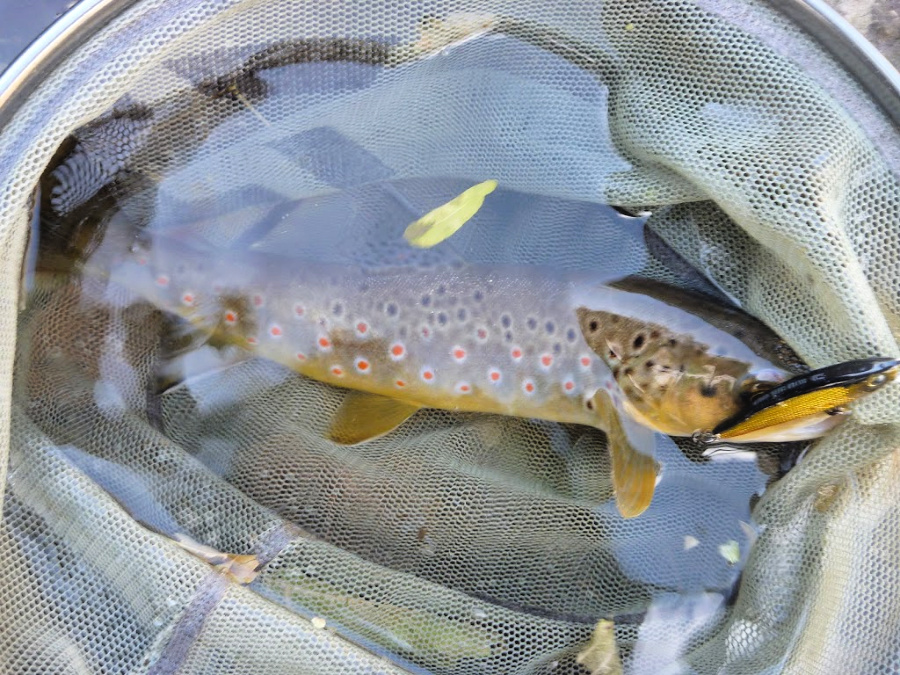 On this second stream, I caught just two fish. The stream is popular and convenient, so it gets a lot of fishing pressure. A wind kicked up on the day we fished it, with gusts that were so strong that we had to fish between the gusts and eventually had to stop fishing entirely. 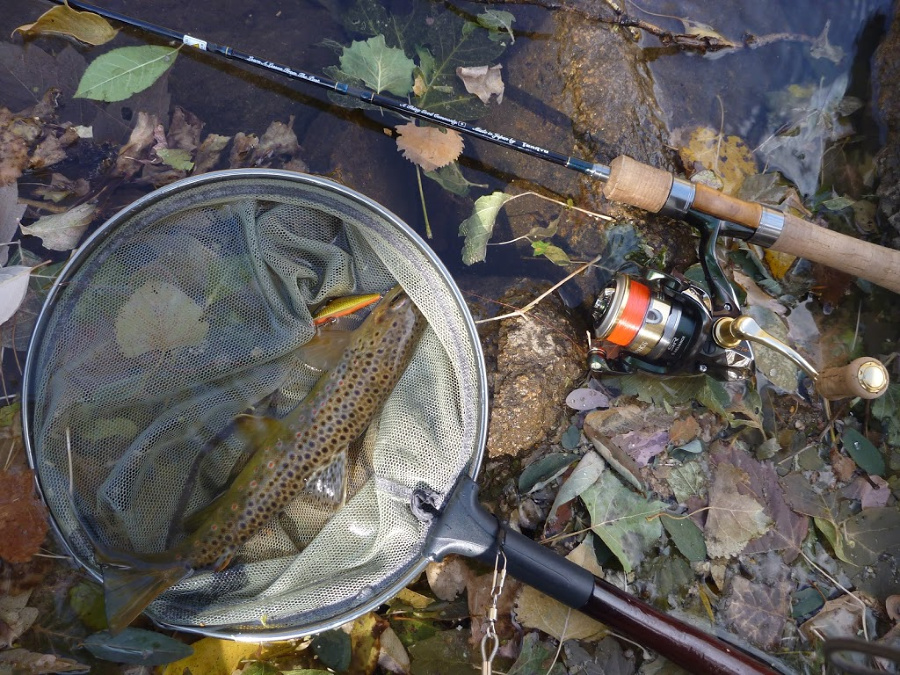 Even with only a couple fish in the net, it was a good day (a short day, but a good day nonetheless). I often fish alone, but I think I learn more when I fish with someone else. I've used this quote before, but I think it's worth repeating. As the great Yogi Berra said, "You can observe a lot just by watching."


Finesse-Fishing.com does not sell personal information.