These rods are better than that. These are rods you'll want to use all the time. Think of them as convenient rods. Think of them as "go to" rods. If you get one, chances are it will be the rod you reach for wherever you go.

Some anglers (I think mostly bass guys who fish from boats) have a bias against multi-piece rods. Not me. I love my 4-piece RZI50UL-4! If I am going to fish lures, more often than not, that's the rod I'll fish. It is just so convenient, but that's not the only reason it's the rod I fish with most.

The RZI50UL-4 is the Rayz Integral Twitchin' model. It is a rod designed for light lines (1-4 lb) and light lures (1-6g) in the headwaters. The action will give you a lively fight with headwaters fish, but there is enough power in the butt section to handle the occasional surprisingly large fish. 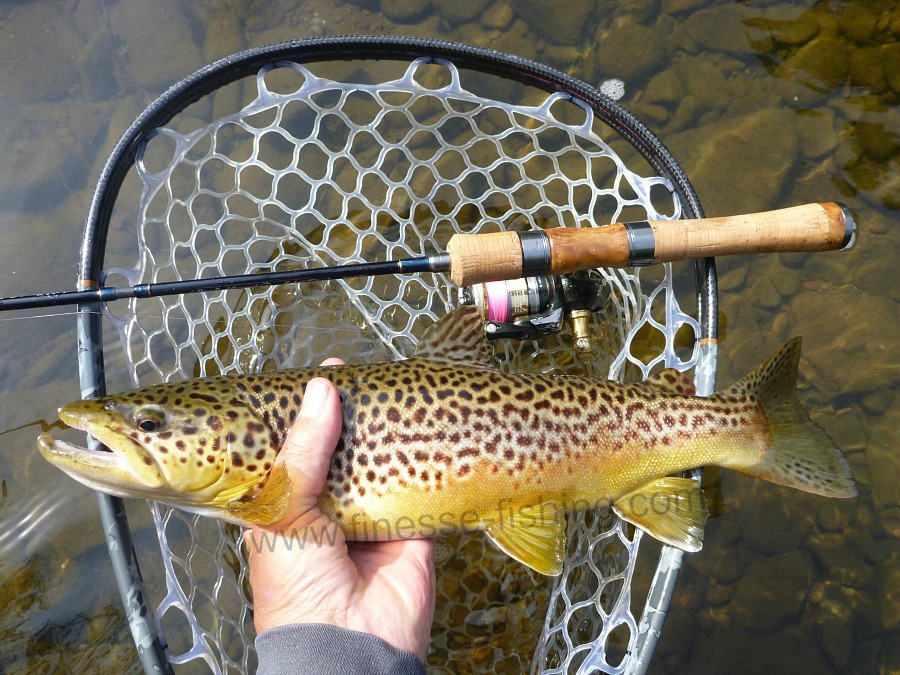 The Tenryu Rayz Integral RZI50UL-4 is the softest of Tenryu's rods designed for native (wild) trout.

Being a bit softer does not mean it is less capable of landing nice fish.

What it does mean is that it is more capable of doing flip casts.

Most spin fishermen do a standard overhead cast, or perhaps a sidearm cast when on a small stream with low tree branches. With a flip cast, the rod is held directly in front of you. A sharp (but short!) downward motion with your wrist starts the rod tip downward. When your wrist motion stops abruptly, the momentum of the lure bends the tip further down and back, loading the rod. A very slight forward push with your hand loads the rod a but further. You then release as the rod tip starts to recover. If you have timed your release perfectly, the lure will shoot towards your target with a very flat trajectory.

The big advantages of a flip cast are 1) there is very little movement of the rod and your arm, so you are much less likely to scare the fish you are trying to catch; 2) done well, the cast can deliver the lure under overhanging tree branches; 3) because your rod starts out pointing directly at your target, your cast should always go directly towards your target. Distance and trajectory take practice, but side to side accuracy should be right on almost from the very beginning.

A good flip cast takes practice (timing the release is critical). It takes a lure with a bit of weight (a 4.5g sinking minnow lure is about perfect). Most important, though, it takes a rod that is soft enough to load properly!

I have a friend in Colorado who was raving about his $700+ Anglo&Co rod, which he said was perfect for flip casts. When I went to CO for a business trip I arranged to fish with him for a couple days. He showed me his prized rod and showed me how he did his flip casts. I tried the Anglo&Co rod long enough to get the timing about right, handed it back to him, picked up my Tenryu Rayz Integral RZI50UL-4 and within a few minutes was doing the exact same casts. (The Tenryu can do them easily, I still need to practice my release timing.)

Please understand that the flip casts my friend showed me are not the same as the "wave" casts that Erne St. Claire and Joe Robinson wrote about. To do the wave casts, one would need a rod that is much slower and much softer than the Tenryu Rayz Integral RZI50UL-4.

His Anglo&Co rod is a nice rod, don't get me wrong, but the Tenryu is, too, has a nicer grip (in my opinion) and can execute the same casts. Plus, it's a lot less expensive (about half half as much). Anglo&Co and Tenryu are both small family-owed companies, but Tenryu is large enough to have some economies of scale, which get passed on to their customers. 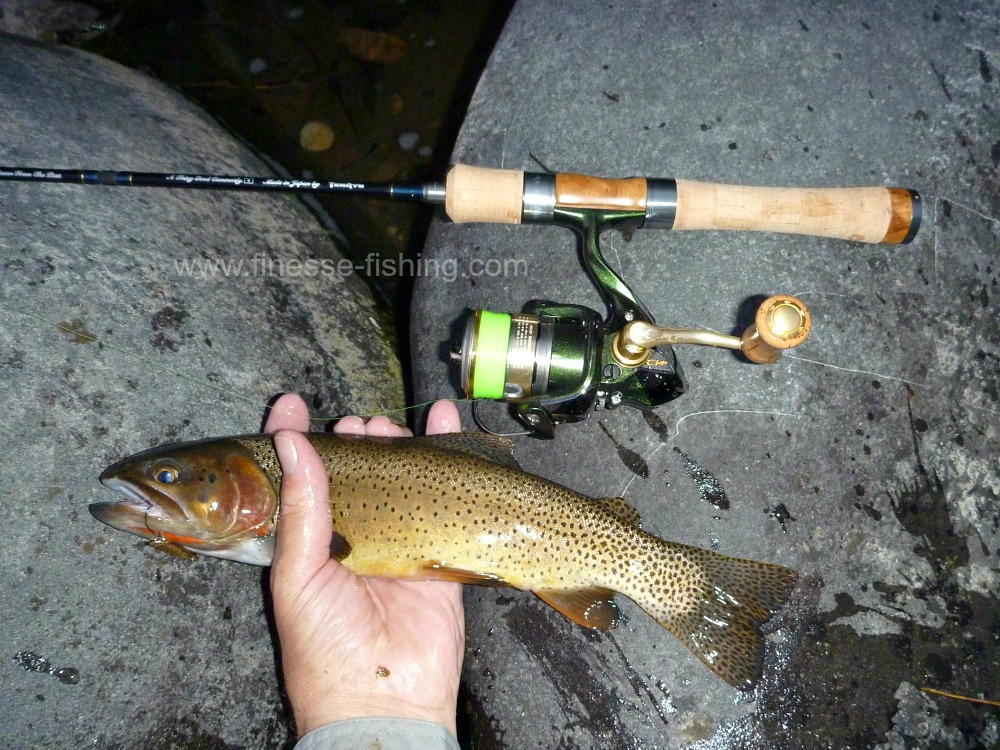 In 2017 I went to Livingston MT to give a presentation to the International Federation of Fly Fishers. While there I took advantage of some free time after the sessions to do a little spin fishing. I didn't want to pass up the chance to catch fish like the Yellowstone Cutthroat shown above. The Tenryu Rayz Integral 4-piece rod easily fit in my suitcase. Taking a 2-piece rod would have required checking a second bag.

The Tenryu Rayz Intergral rods also fit in the rod holders or water bottle holders on the sides of many packs. For that matter, they will fit completely inside even modest daypacks.

A couple years ago a friend hiked the John Muir Trail in the Sierras. He's an avid tenkara angler, so he took a couple tenkara rods with him. The guy he went with also took a tenkara rod, but in addition, he took a multi-piece spinning rod. The spinning rod was the hit of the trip. By far, most of the fish they caught were caught in the lakes. By far, most of the fish they caught in the lakes were caught with the spinning rod. My friend the avid tenkara angler bought a Tenryu Rayz Integral RZI50UL-4 spinning rod right after he got back!

But seriously, don't think of the rod as a travel or backpacking rod. It's a great rod - it just happens to be very convenient to take with you no matter where you're going.

The RZI50L-4 is the Rayz Integral Jerkin' model. The design goal was for a backpacking rod that you can use anywhere, with heavier plugs and deep divers and slightly heavier line than the UL model. The moderate action yields pinpoint accuracy. 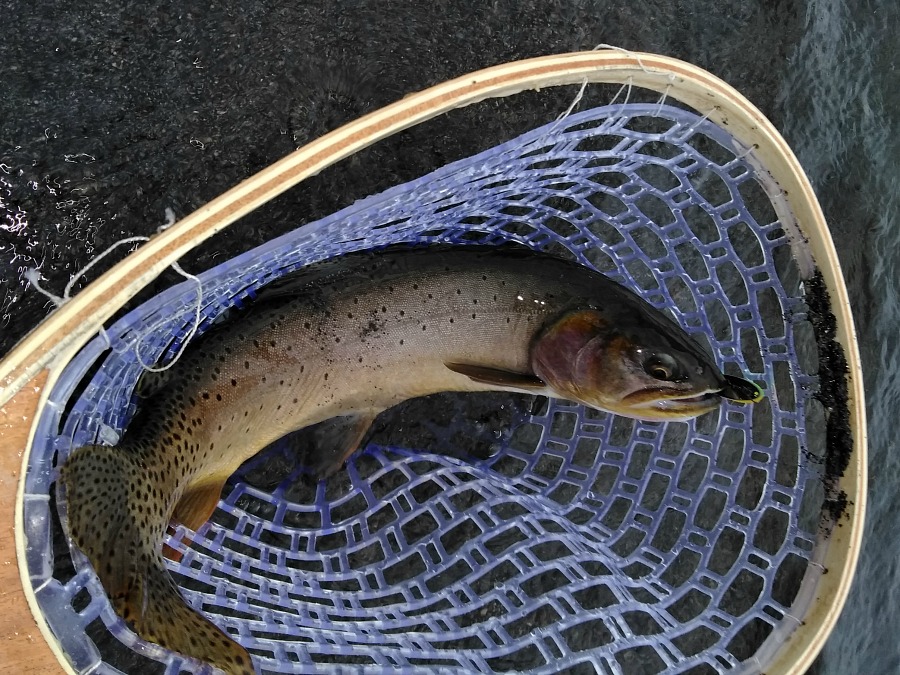 Kyle R sent in the photo above and a note to go with it: "I was at Yellowstone last week. After being skunked on the fly and snowed out of the rivers, I decided to go fish Yellowstone lake with my Rayz Integral RZI50L-4. Using 1/4oz Kastmasters and Daredevil spoons I was wade casting out into the lake. Hooked a 22" Cutthroat that put up a good fight, but the rod handled him perfectly. Fought him for about 5 minutes, letting the drag on my reel wear him down.

He was the only one I caught that day due to the weather. The next day however using a red and white Dardevil, I hooked a huge Cutthroat. Talk about a ass wooping. I think it had taken me about 15 minutes to land him, just smoking my arms and bending that rod in half. Seriously thought my drag system was going to burn out, that being my first time having a screaming reel. Unfortunately I do not have a picture due to my phone being buried under my waders and not wanting to stress the fish more for a pic. Again, last fish of the day due to the weather.

My last day I hiked up to Trout lake, which is the clearest lake I have seen. Using a 1/8oz Brown Trout Kastmaster I hooked a 16"-18" Cutthroat. He put up a good fight, but I managed manipulate him to a clearing in the weeds rather easily.

The rod is great! Handled all of those fish without a single issue, and it could cast spoons far enough to fish the edge of the large lakes. Definitely sold on it's ability and how far it can punch above it's weight class. Seriously, that rod saved my trip, cause I was not catching a damn thing on the fly."

As with the Tenryu Rayz RZI50UL-4, don't pigeonhole the rod as a travel or backpacking rod. It is great rod for lines up to 6 lb and lures up to 1/4 oz. It's just more convenient than a 2-piece rod. You'll definitely take it to Yellowstone - but then again, you'll take it everywhere!

The Tenryu Rayz Integral rods have stainless K guides with SiC rings. The dark blue blanks share the Rayz heritage. The four-piece blanks make them excellent choices for backpacking or travel. The action makes them excellent choices if you want a rod that is just slightly softer than the Rayz or Rayz Spectra rods (and can do flip casts with the best of them).

The rods come with a flat canvas case.

Two days after my order, the Tenryu Rayz Integral RZI50UL-4 was safely delivered to my front porch.

I've never had a fishing rod this nice. Never even held a rod in my hand that was this nice.
The beauty and quality of craftsmanship are exactly as advertised.