Sunday's trip was mostly a tenkara nymphing / keiryu trip, as I had some nymphing lines and a new keiryu rod that I needed to try for the TenkaraBum website. Almost as an afterthought, I brought along a Tenryu Rayz RZ53UL spinning rod. Boy, am I glad I did.

First a bit of history. The first time I tried the C'ultiva .7 gram JH-85 jig head and 1.3" Pinworm for trout (mid-February) I caught a couple and didn't much think about it. I thought they should work, and they did, so I went on to try other things.  Getting new items in for the shop is both a blessing and a curse.  There are always new toys to try out, but I really don't get much time to play with any one of them. (Too many rods, not enough time.)

Yesterday I tried the C'ultiva .7 gram JH-85 jig head and 1.3" pearl Pinworm again. I doubt I spent any more time with them yesterday than the first time I used them - it was the end of the day and I had already stayed longer than I had planned. Just before heading for home, though, I pulled out the spinning rod and gave it a go. All I can say is "Wow!" I won't wait that long to try them again - I've got some new rods coming in this week that I know I'll want to try them with!

Fly fishermen talk about the excitement of seeing a trout taking a dry fly. I can assure you, that is nothing compared to seeing a trout come from nowhere and grab your Pinworm no more than three feet from your rod tip! Having a leaping rainbow with only about 3' of line out is guaranteed to elevate your heart rate! I had another trout hit the Pinworm only about 5' out. I don't know what goes though their pea-sized brain, but it's like the Pinworm getting away makes them lose all sense of caution. 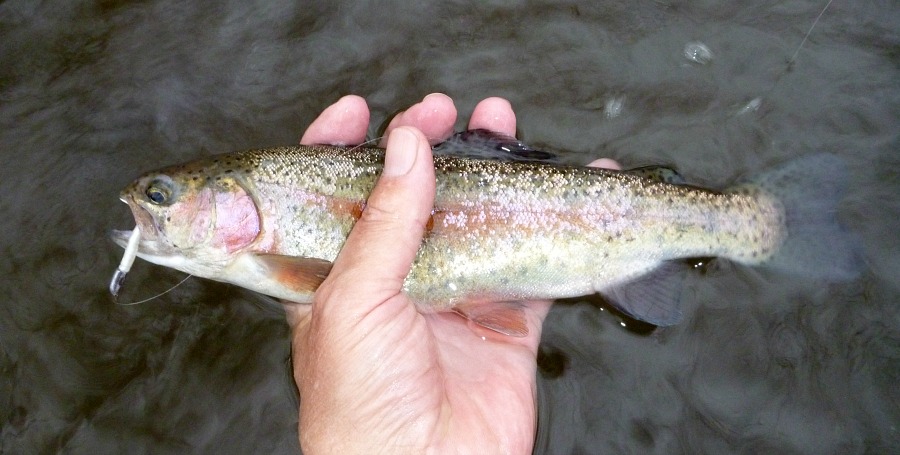 Came from nowhere to grab the pinworm.

People say that trout don't "miss" your lure of fly - they reject it at the last second.  If that is true, though, why would they slash at it again and again on subsequent casts - until they finally catch it? I think the darting action of the JH-85 causes them to miss, but it also causes them to try again! And all this might be within just a few feet of you! If you see a flash but don't feel a thing, by all means, cast back to it.

I have read that when fishing spinners or plugs in a stream, the best approach is to cast upstream and retrieve back down. I guess the theory is that frightened baitfish are not going to swim upstream. With the C'ultiva jig heads and Pinworms, though, I have found they were much more productive when fished downstream. All of the fish I caught yesterday were caught fishing downstream and most  were hooked with a fairly slow, twitching retrieve parallel to the bank - right where you could see that the flow was slower than the main current. Casting across the stream into bank eddy on the far side, with the rod tip held high to keep the line above the current, also yielded a fish.

The .7 gram JH-85 is not very heavy, so it will not get very deep if you are retrieving it upstream and there is any current to speak of. I did get some hits in the middle of the stream, but only where it had widened out and the flow was slower. The light weight of the jig does seem to keep it out of the rocks, though.

I was pleasantly surprised the first time I fished the .7 gram JH-85 with the Tenryu Rayz RZ53UL, and was again yesterday. The rod is rated for lures of at least 1 gram (and up to 6 grams). The .7 gram jig head and the 1.3" Pinworm together weigh exactly 1 gram. With the RZ53UL you can cast it as far as you need to (further actually - I'm a little rusty and I did put one cast onto the far bank, which I had to break off and retrieve later). I suspect any stream that is too wide to reach all the spots you'd want to hit with the .7 gram JH-85 is probably deep enough that you'd want a heavier jig head anyway. With the Tenryu light action rods (RZ56L or the 4-piece RZI50L) the 1.7 or 2.2 gram JH-85 would be a better choice.

I didn't catch a huge number of fish, but four trout in about 100 yards of stream and no more than 20 minutes just isn't too bad! At the very least, it's a nice way to end the day.