Plans gang aft agley (that is what plans are famous for).

The plan, at least Plan A, was to fish a well-stocked local stream but this time to travel light - no heavy vest with every pocket bulging with lure boxes, no backpack with a couple back up reels (I have been known to get bird's nests in baitcasters that could be cleared only with scissors and swear words), no heavy water bottle, no lunch. Just one small lure box with a few spinners, a few spoons and a few smaller plugs and a spool of tippet. I did carry a second rod, but that was mostly to be able to compare, back to back, the Tenryu Spectra RZS51LL spinning rod and RZS51LL-BC baitcaster. The plan was to fish four reasonably short sections of the stream with a stop back at the car for lunch between sections 3 and 4.

For the Plan A part of the day, it turned out that I fished only the baitcaster. I hadn't fished the Spectra baitcaster much and I wanted to get a better sense of it. Although I fished with a Daiwa Silver Creek Minnow 44S Tennessee Shad and a Forest Marshal River spoon briefly, most of the time I fished a 4g copper Daiwa Silver Creek Spinner.

First trout of the day.

Although the photo above shows the first trout of the day, it wasn't the first fish. The first fish was a bluegill that might have been 4" long. It was an interesting catch.

A friend and I go to Maine every year (or at least, every non-Covid year) to fish for smallmouth bass. There is a small pond we often fish that is ringed with low bushes. The land is pretty marshy and the water is at least a couple feet deep right at the shoreline. The bass (all largemouth in this pond) are tight to the shore, under the ovehanging bushes. We try to cast as close to shore as possible, and it isn't unusual to cast just a wee bit too high or too far and get into an overhanging bush. On those times when the line was just draped over a thin branch and the lure reached the water, I would often just jiggle the rod, which wouldn't free the line, but would make the lure jiggle on the surface. It was not at all unusual for a bass to hit the jiggling lure and pull the line free. 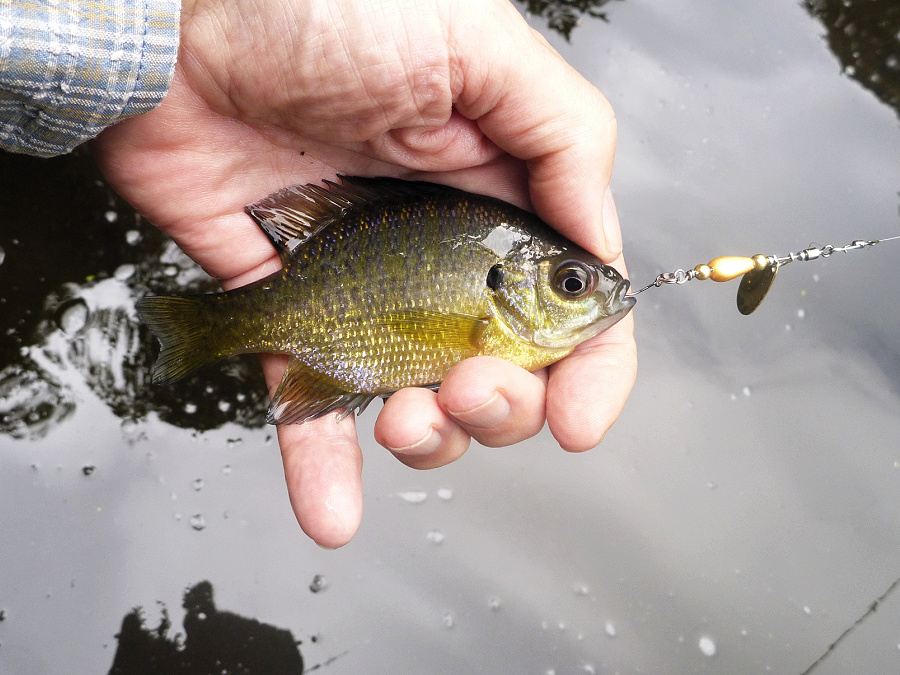 That's essentially how I caught the bluegill on Sunday, although that was not my plan. I had cast over and well beyond a log that was in the stream, thinking the current would take the spinner downstream of the log and my retrieve would bring the spinner back near the downstream end of the log. Unfortunately, my line settled on the one branch sticking up from the log. I didn't try the jiggle technique because I'd never had a trout hit a lure when my line was draped over a branch. I didn't even think of a bluegill, and in any event, I never would have thought a small bluegill would hit a 4 gram spinner.

That's what happened, though. As I waded out to free the line from the branch the line suddenly tightened and then slid off the branch. Fish on. Not much of a fish, but at least he was big enough to pull my line off the branch.

Those two fish were the only fish in the net from the first stream, although I did have a few that were on just long enough for one jump an a few more missed hits.

Plan B was a completely different section of the same stream, one where I often do well keiryu fishing, but have had only modest success with lures. On Sunday, "modest success" would be generous. I had two fish make a swipe at the Silver Creek Minnow as I was fishing it with the energetic jerky retrieve you often see in Japanese YouTube videos (search for 渓流 釣り ルアー).

I then tried a steady retrieve. The lure seemed to get much deeper and on the fist cast I hooked what looked like a holdover rainbow. Unfortunately, I think I rushed things and the hook pulled free just before I got it to the net. After that disappointment I went on to Plan C.

The Plan C stream was the only one in the area with nearly normal flows. The others were all quite low. Probably for that reason it was also the only one that already had three cars parked at the bridge. By then it was mid-afternoon and I could reasonably assume that all the water I'd have time to fish would have been fished already - at least once.

Plan D was my love-hate stream. It had been my favorite when it ran a consistent 32 CFS. Lately it has been running about 8 CFS and has been essentially unfishable. A week before my trip, though, the river gods increased the flow to 15 CFS, which is the highest it's been all year. Given that I had about run out of other options, that was good enough for me.

I did not have high hopes, though. I hadn't planned to fish this stream so my "travel light" lure box had no small lures. By far, most of the fish I catch in this stream are 5-7" and my most effective lures to date have been 2 grams and smaller. With only a selection of 4 to 5 gram lures, I did not expect to have a very good day. 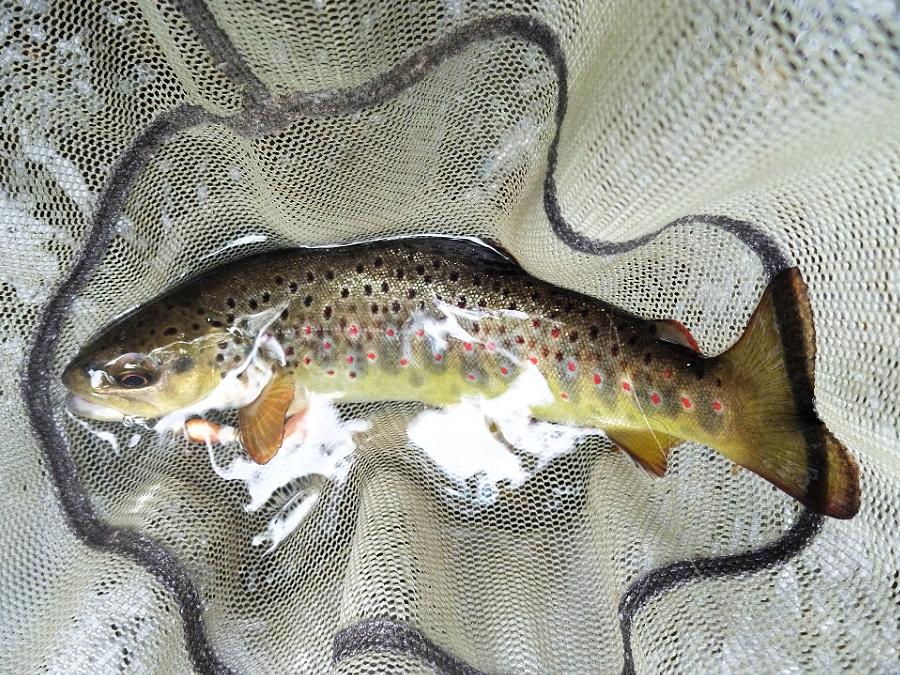 After only three or four casts in the first pool, though, this nice 9-incher grabbed the Silver Creek Spinner. I often take one photo of a fish while it is still in the net because I have learned from bitter experience that a fish is apt to slide or flip out of my hand just before I click the shutter. The shot in the net is the only shot I know I can get.

What I did not realize until just now is that the bottom of the Daiwa Keiryu Damo 25 net gives a good frame of reference for estimating a trout's length. The bottom of the net is a circular piece sewn to the sides. The diameter of the net bottom is right at 9 inches, measured to the outside edge of the seam. It's not quite a measure net, but it does give you one measurement. (The bottom of the Keiryu Damo 30 is a bit over 10".) 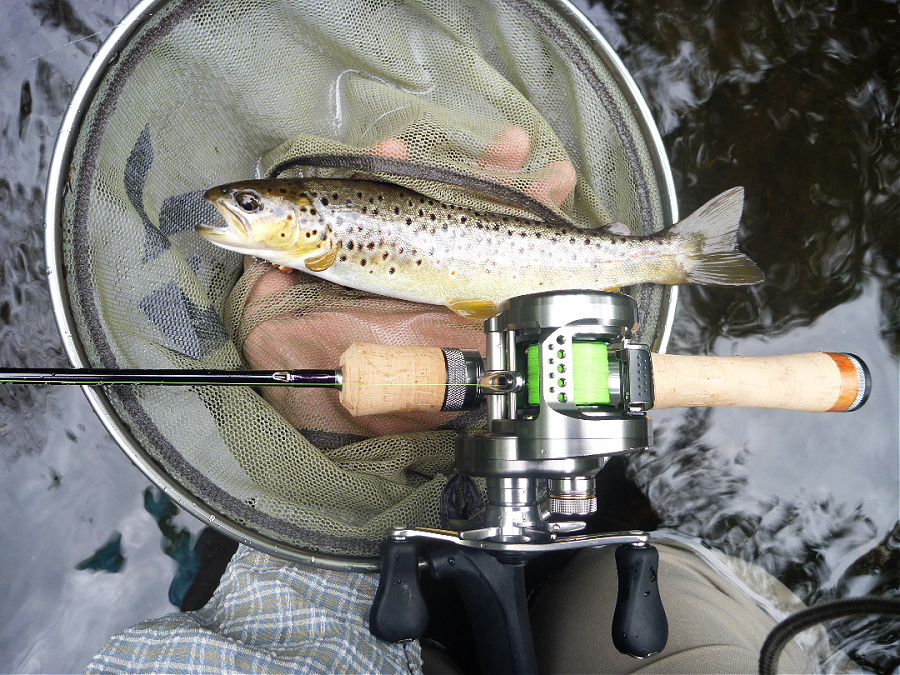 And just a few casts later

Almost as surprising was picking up a second trout from the same pool. The inside diameter of the Keiryu Damo 25 net hoop is 9 1/2 inches, which also provides a frame of reference if you hold the trout up so that it is in the same plane as the hoop. I figure this fish was about 8 inches - a bit smaller than the first but larger than most I catch in this stream. 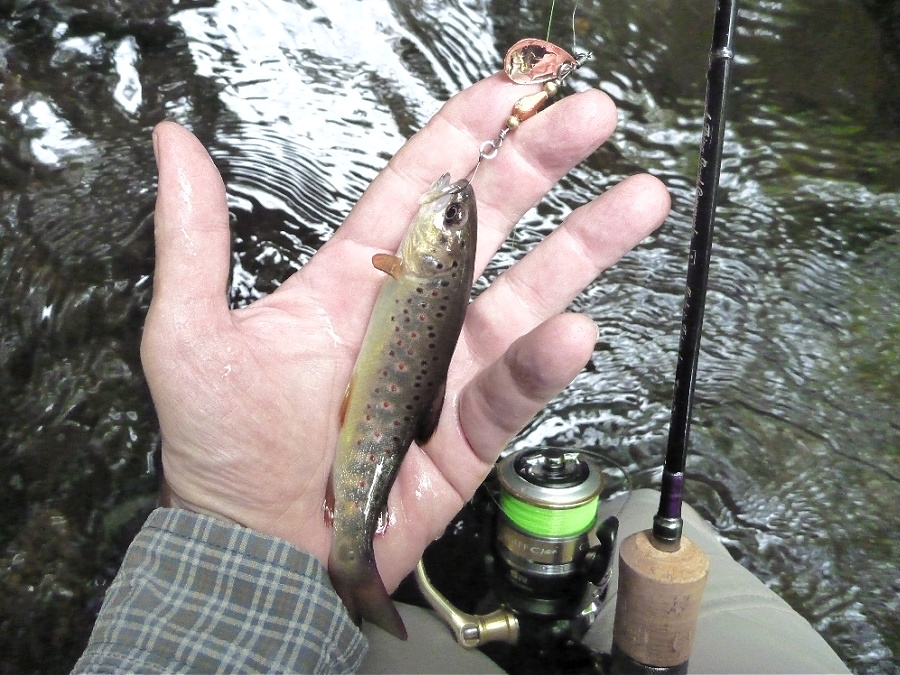 After another smaller fish on the baitcaster I switched to the Tenryu Rayz Spectra RZ51LL. I kept the 4g copper Daiwa Silver Creek spinner, though. The two rods are made on the same blank so the action is the same - except for one thing. With the spinning rod you don't have to even think about bird's nests. I really like being able to do a relatively short cast with just a quick flick of the spinning rod, which with a baitcaster always gives me a bird's nest. (Maybe you can do it, but I can't.)

Baitcasters can be more accurate - if you are accomplished with a baitcaster. It is certainly easier to slow and stop a cast when the lure is directly over your target (or before it reaches the bushes on the far bank if your cast was a bit too energetic). Fishing with a spinning rod is easier, though. I do miss not being able to stop the cast as reliably, but I certainly don't miss the occasional bird's nest! I think fishing with BFS gear is more challenging and more fun, but it can also be more frustrating. And with a spinning rod as nice as the Spectra, it's just a very nice way to spend an afternoon.

I think I caught five fish using the spinning rod. Considering that it was already getting late and I'd fished a much shorter stretch of the stream than I usually do, I think 8 fish was a reasonably good tally. It certainly beat the first three streams put together. 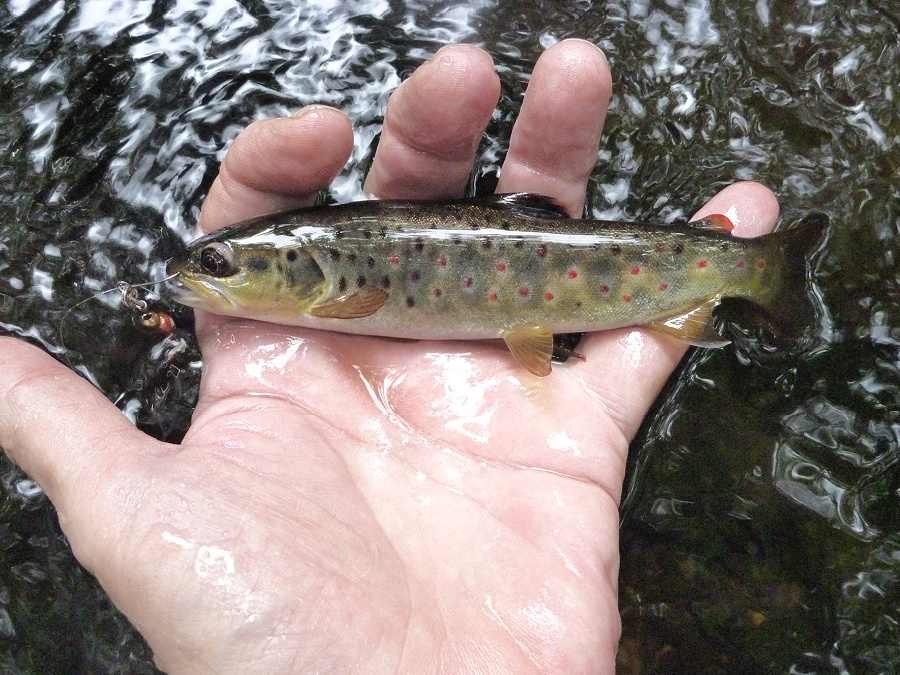 I didn't expect small trout to hit the 4 gram spinner.

The most surprising thing of the day, other than perhaps the bluegill pulling my line off the branch, was that the small trout hit the 4 gram spinner as well as they did. I truly thought I might get skunked because of the lure's size.

Given that a 4 gram lure is much easier to cast than a 1.5 or 2 gram lure when fishing with a baitcaster, if fishing small streams where you expect to catch smaller fish, don't be afraid to use a 4 gram spinner!