I don't remember exactly how the topic came up, but a couple weeks ago I suggested to Les A that the next time he takes out his Tenryu Rayz RZ39LL (which he calls his "Mighty Mite") he should put his Aldebaran BFS XG on it and fish it as a baitcaster. I'd done that a few times in the past and found that it worked surprisingly well.

I had planned a tenkara day for last Sunday, but thought that as long as I had recommended the RZ39LL/Aldebaran combo to Les, I should try it again myself. I'm glad I did.

There are a few things I really like about the Tenyru Rayz RZ39LL, not the least of which is that the breakdown length is just 23 1/4" and it fits in a Medium Rod Case. You can strap it on a backpack and it won't tower over your head, catching on low branches as you walk along the stream-side trail. The short 3'9" overall length may seem way to short - that is until you try it on a small stream and realize that you just don't need a long rod for a narrow stream. 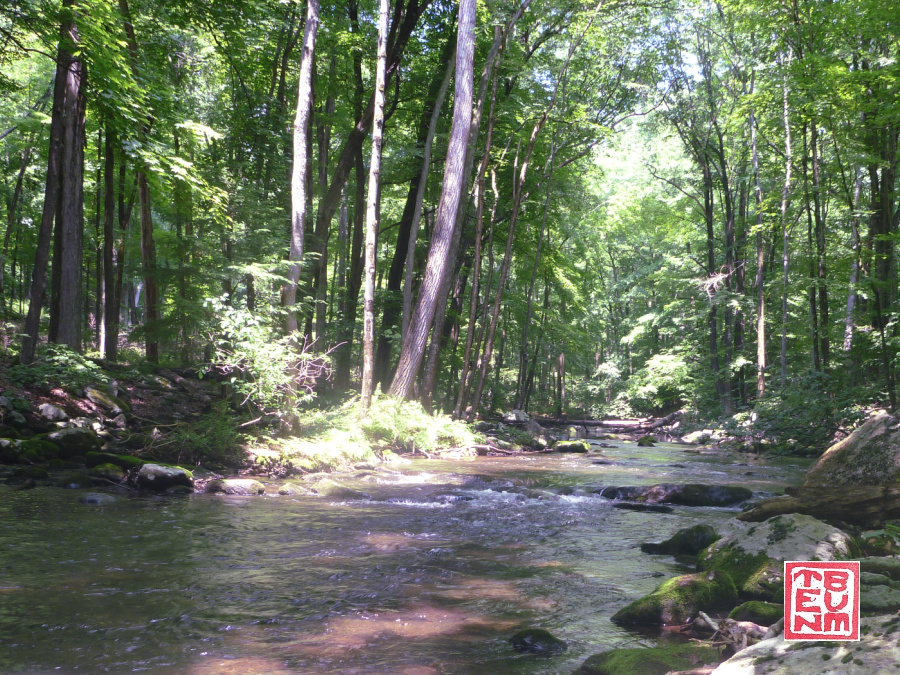 The stream I went to was running at 16 CFS (cubic feet per second) that day. It has a very nice population of 5-7" wild browns. While I have occasionally caught larger fish in the stream, they are quite rare because nearly all seem to head downstream to bigger water once they reach about 9 inches. Then again, there is a 5 fish limit with a minimum size of 9 inches, so once they reach 9 inches they may get taken home.

The larger fish in the stream (the 8-9 inchers) will hit a Daiwa Silver Creek 50S minnow but I catch far more fish with either a 1.2-1.8g micro spoon or the Smith AR-S 2g single hook spinner. 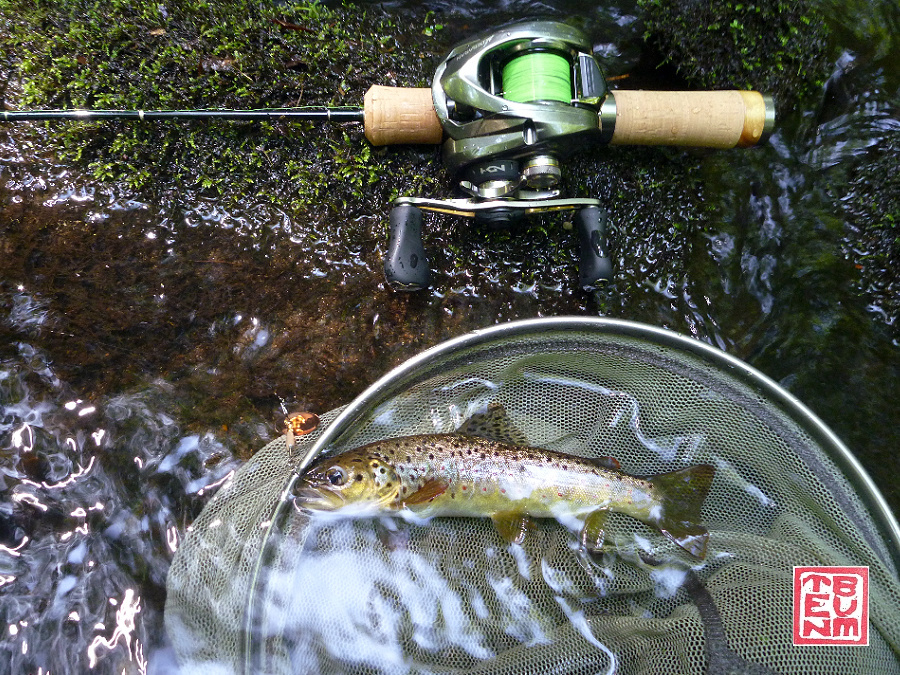 The only lure I used on Sunday was an AR-S 2g single hook spinner with a copper blade and a brown body. Unfortunately, that color will be out of stock until November. On my previous trip I fished a Daiwa Presso Eve 1.2g micro spoon quite effectively, but with a baitcaster I do find the 2g lure to be easier to cast.

Getting back to the Tenryu Rayz RZ39LL as a baitcaster, I love it! I know that a longer rod can cast a lure further. I don't care. On a small stream, I can cast a 2g spinner with a 3'9" rod as far as I have to cast. With light lures, which I find to be more productive on small streams, it is hard to load the rod enough to do a standard flip cast. I find it much easier to do what is essentially an underhand cast (not sure what the proper terminology would be), starting with the rod as close to vertical as possible (easier if standing on shore than if wading).

With a longer rod, such as the new Tenryu Rayz RZ4102B-UL, my casts are closer to sidearm. I am by no means an expert caster, and I am more accurate with an underhand cast than with a sidearm cast.

I suspect some readers will be horrified that I am extolling the virtues of a spinning rod (the RZ39LL) when fished as a baitcaster. The guides are all wrong, there is no trigger on the grip, etc, etc. All I can say is "It works." Let me rephrase that, "It works really well!" Sunday ended up being a "many" day. I didn't count fish and I didn't take photos of all of them. It was just a very productive day.

I'm not just trying to sell rods. At this instant, I have only four of the Tenryu Rayz RZ39LL rods left in stock. They've been discontinued and I will not be able to get more. I know they will sell out before long anyway. My whole point in this trip report is to tell people who may already have an RZ39LL, or who may be looking for a small stream baitcaster that the very short rod works extremely well.

When the RZ39LL rods do sell out, or for people who believe deep down that a baitcasting reel should never be put on a spinning rod, the 4'2" Shimano Cardiff B42UL-3 will work just fine also.

One thing I am learning when casting 2g lures with the baitcaster is to rely more on my thumb and less on the spool tension and brake settings. When following the "rules" on how to adjust a baitcaster, I could never get light lures to go where I intended. As a right handed caster, with a sidearm cast, the lure went too far to the left; with a backhand cast it went too far to the right and with an underhand cast the trajectory was too high.

Now I will admit that I may be heading in the wrong direction with this line of thinking. As I frequently write on my TenkaraBum site, I'm a merchant, not a master. My casting is not yet consistent, but my straightest, most accurate casts have been with less spool tension and less brake than any of the YouTube videos on how to adjust a baitcaster suggest, and just a very little bit of thumb pressure to keep the spool from turning faster than the lure is pulling the line.

One tip I was given early on, which I have to admit I haven't used recently but will definitely go back to, is to put a piece of electrical tape on the spool after making my longest controlled cast. What that does is prevent a bird's nest from going deeper into the reel than that point. You can still get a bird's nest, but you can't get a bad one. If a big fish hits as soon as the lure hits the water, and runs from there, the line will just pull up the tape and more line can play out.

Alternatively, if you are fishing a very small stream and you know your longest cast will be no more than 50 feet, and there is virtually no chance that you'll hook large fish, then there is absolutely no reason to have 50 yards of line on your reel!

I still need a lot of practice, but I have to say I really enjoy fishing with a baitcaster in a small stream. It is very challenging but very rewarding.

You are right that the RZ39LL makes a great baitcaster!

I can't believe I'm saying this, but I'm getting won over to baitcasting.

I think I will continue to use spinning gear on ponds, but in the stream, there is an accuracy and quickness that baitcasting can do that nothing else can.