In the past I have taken issue with Thoreau's comment that many men fish all their lives without realizing it isn't the fish they are after. I fish to catch fish. However, on a day in late June it truly was good just to get out of the city and into the woods.

There is a Japanese practice called shinrin-yoku, which translates into English as "forest bathing", or as Qing Li put it in a Time magazine article from a couple years ago "bathing in the forest atmosphere, or taking in the forest through our senses." The bathing is not literal, as in taking a bath or shower. It is more like immersing yourself in the forest. The sights, the sounds, the smells, the textures. It is not camping, hiking or even fishing. It is just being in the forest, awakening your senses and allowing the stresses of modern life ooze away. There are scientific studies showing true health benefits from forest bathing, but you don't need the studies. If you do it - just being in nature, relaxing and awakening your senses - you will feel the benefits.

I did go to fish, though, so I'm sure I didn't get the full benefit of forest bathing. I did feel my stress get carried away for a few hours, though, and I also managed to try a few new rods that had come in just before lock-down and that I hadn't had a chance to fish yet. 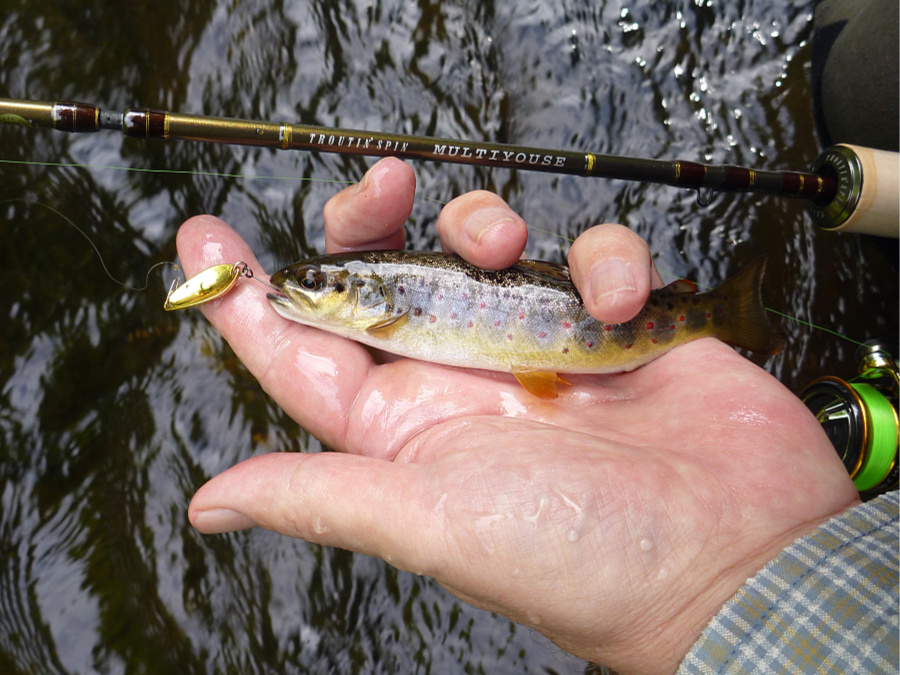 First up was a Smith Troutin' Spin Multiyouse TRMK-423UL, which is a 4'2" 3-piece glass ultralight spinning rod. It is a fun rod. Over the last couple years I have gotten several questions about a glass baitcaster that Angler Saito used in his "Enjoy Fishing" YouTube channel some time ago. The combination of a heavy lure and slow motion photography made the flexibility of the glass rod seem very attractive. It turns out that there are really very few glass rods, though. The two Smith Multiyouse spinning rods, the TRMK-423UL and TRMK-483UL are the only 100% glass rods I know of (other than the Anglo&Co rods - which I can't get for the shop). [I had forgotten that Palms has a few 100% glass rods in their Egeria series.]

Rather than copying Angler Saito's use of heavy sinking minnows, I chose to use small, light lures because most of the fish in the stream I chose are only 5-7" long. They're all wild. NY doesn't stock fish that small. I wanted to test the short, ultra-portable 3-piece rod with lures you might use in small headwaters streams. My lures for the day were Smith AR-S single hook spinners, which weigh 2 grams; and Daiwa Presso Eve spoons, which weighed 1.2 grams. The Eve spoons are also made in .8g and 1.0g weights, but I only carry the 1.2g models.

The stream I fished is small, and was flowing at 30CFS on the day I fished it. The Smith Multiyouse cast the 1.2g and 2g lures as far and as accurately as you'd want on a small stream. With the light lures, I didn't get the deep bend in the rod that you'd get with the 6 gram lure that is the upper limit of the rod's rating, but I did get pinpoint casts, which is more important anyway. 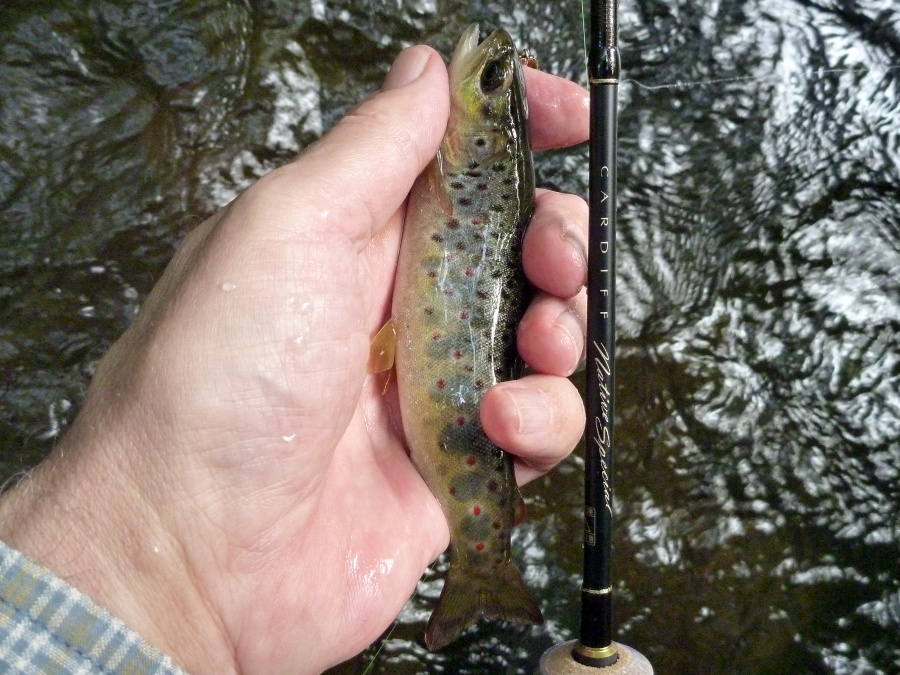 Next up was the Shimano Cardiff NS (Native Special) S42UL-3. As with the Smith Multiyouse, I fished both the Smith AR-S  2g spinner and the Daiwa Presso Eve 1.2g spoon. At first glance, the Shimano and the Smith rods are really quite similar. Both are 4'2" 3-piece rods. Both break down to about 18", making them very convenient for backpacking into the headwaters or up to Alpine lakes. The line and lure ratings are similar (1-5 lb line and 1-6g lures for the Smith and 2-6 lb line and 1-7g lures for the Shimano).

The Smith is just a little bit heavier, and the tip is a bit more flexible - both of which you would expect because the Smith is 100% glass and the Shimano is 95.9% carbon.

So which is better? I can't answer that. I think the glass rod might be more fun to fish with. On the other hand, I have heard from a rod manufacturer (Tenryu) and an angler (Les A) that a somewhat stiffer, faster rod is more accurate. All I know is that I enjoyed fishing both rods and both are capable of more accurate casts than I am. If I didn't already have a short rod for the headwaters (the Tenryu Rayz RZ39LL) I would be happy with either one of them. 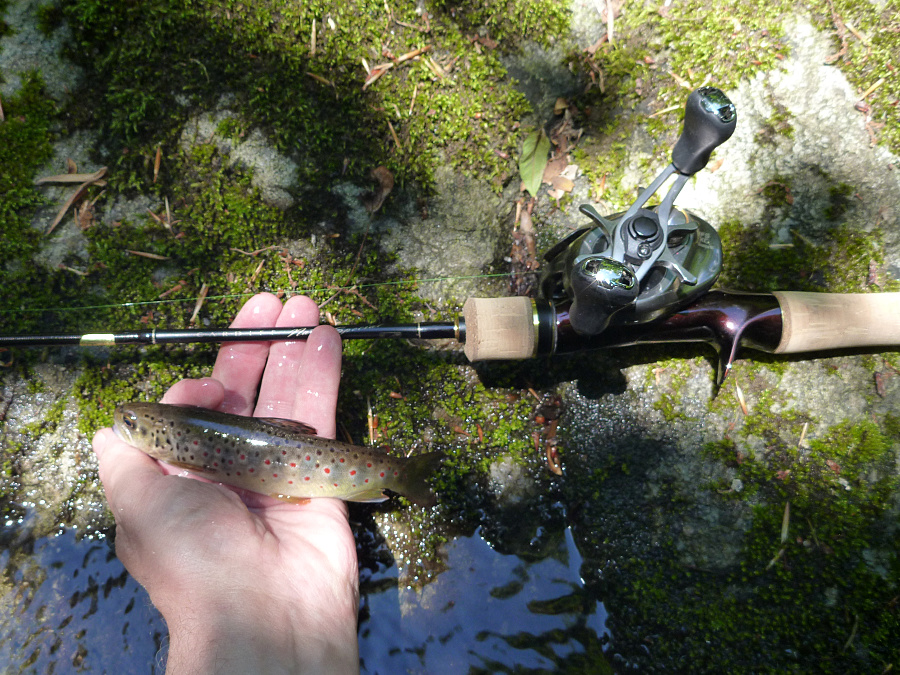 I then switched to baitcasters. Smith doesn't make the Multiyouse in a baitcaster so my rods for the day were the Shimano Cardiff NS B42UL-3 and the Tenryu Rayz RZ4102B-UL. [UPDATE: Smith now has Multiyouse baitcasters in 4'2" and 4'6" lengths. I ordered a couple of both for evaluation. I received one of the 4'2" rods, and a guy looking for a short baitcaster bought it before I had a chance to evaluate it! Now I'm waiting for the other rods.]

I started off with the same Smith AR-S single hook 2g spinner. The Shimano Cardiff NS B42UL-3 and Aldebaran BFS XG handled the 2g lure very well. Several years ago, I had written that the Daiwa Wise Stream 45ULB-3 was likely to be my "go-to" baitcaster because it was so much more convenient to strap to a backpack than my 2-piece Tenryu. Well, I'd have to say that I like the Shimano Cardiff NS B42UL-3 so much better than the Daiwa that the Daiwa has lost it's place on top and is likely to get sold. I rarely sell used rods, but I will make an exception in this case. The Shimano cast the 2g lure with ease. The Daiwa is much happier with a lure twice that weight. For headwaters fishing, where I would want a short rod and would want to use light lures, the Shimano Cardiff NS B42UL-3 is the best baitcaster I've found. 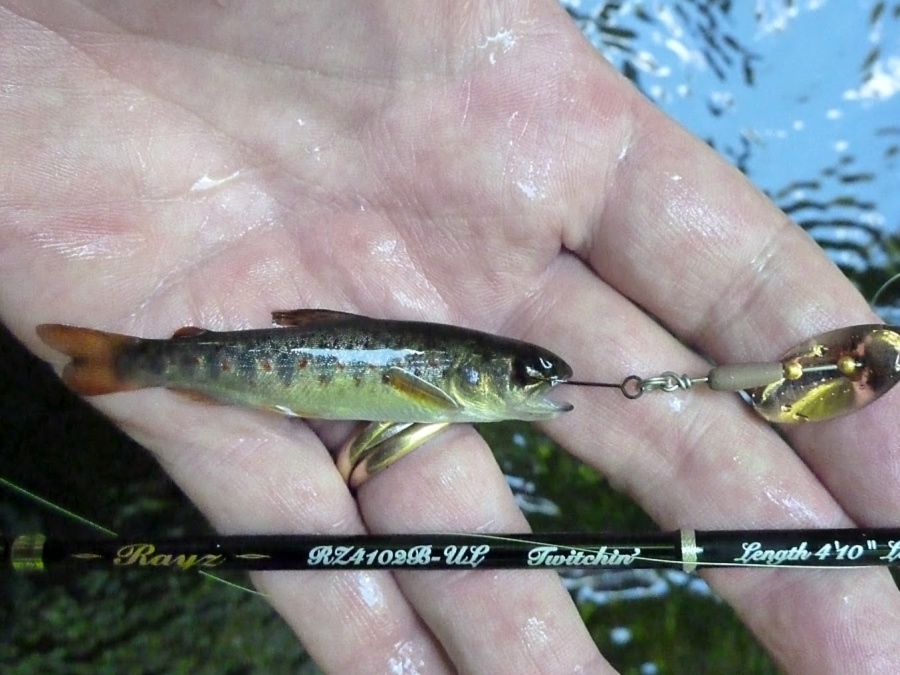 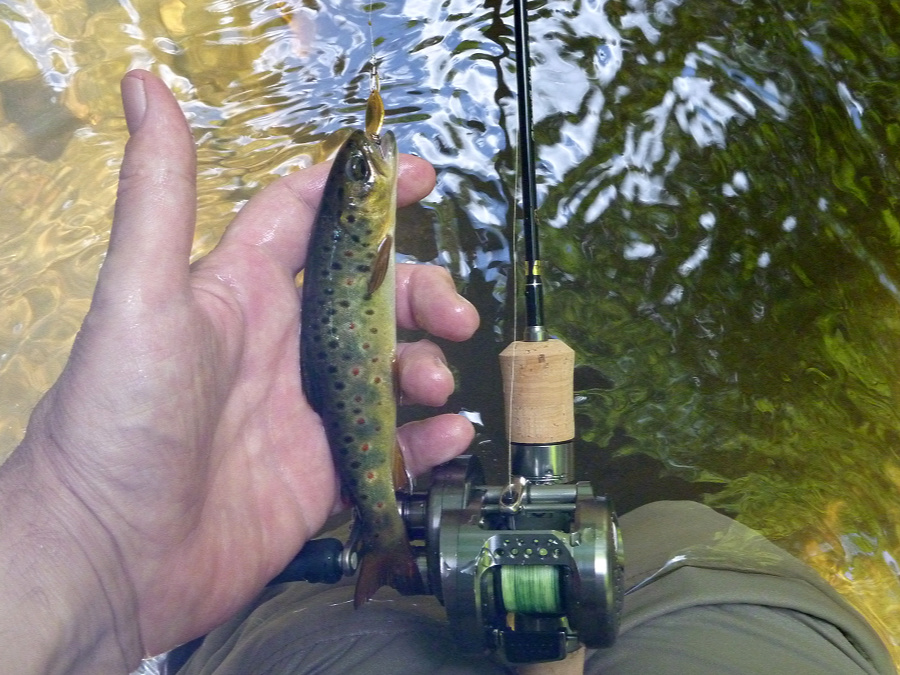 The rod cast the 2 gram spinner so well that I also tried the Daiwa Presso Eve 1.2 gram spoon with which I had done quite well earlier in the day with the spinning rods. I was actually surprised at how well the combination of the Tenryu Rayz RZ4102B-UL and the Shimano Calcutta Conquest BFS HG cast the 1.2 gram spoon.

The lightest lure I've ever cast with a baitcaster was a .9g spoon. At the time, I was using a Shimano Aldebaran BFS XG with an aftermarket Avail spool on a Tenryu RZ53UL-BC (now discontinued). Even though I could cast it far enough to get a hit (which I missed), I decided that it was neither far enough nor accurate enough to be practical. I then switched to a 1.2 gram Daiwa Presso Lupin, which was enough better that I was able to catch a few fish.

I had always thought that the Aldebaran was better at casting really light lures than the Calcutta Conquest. It has a lighter weight spool - which by itself should be decisive. When I was casting the 1.2g Lupin, I was using an aftermarket spool, which was lighter yet. For this trip, though, the Calcutta Conquest BFS HG was pure stock - just as it comes out of the box. Very impressive!

Last summer, I fished the full range of Shimano Slim Swimmer spoons (1.5g, 2.5g, 3.5g and 5.0g) and pretty much decided that larger lures did well enough when fishing for small brookies that trying to cast the lightest possible lures was more a case of "can I do it" than "I need to do it to catch fish." In this particular stream, though, I've caught a lot more fish on smaller lures than I have on larger ones. The 2 gram Smith AR-S does better than the larger 3 gram Smith Niakis or a 4 gram Frank Nale home-made spinner. The 1.2 gram Daiwa Presso Eve spoon does better than the 2 gram Smith AR-S. The fish are small, the water is usually quite low and it gets fishing pressure.

I was really quite impressed with how well the Eve spoons worked - and even more impressed that I could cast them far enough and accurately enough to have a very nice day with the Calcutta Conquest and the new Tenryu Rayz RZ4102B-UL. 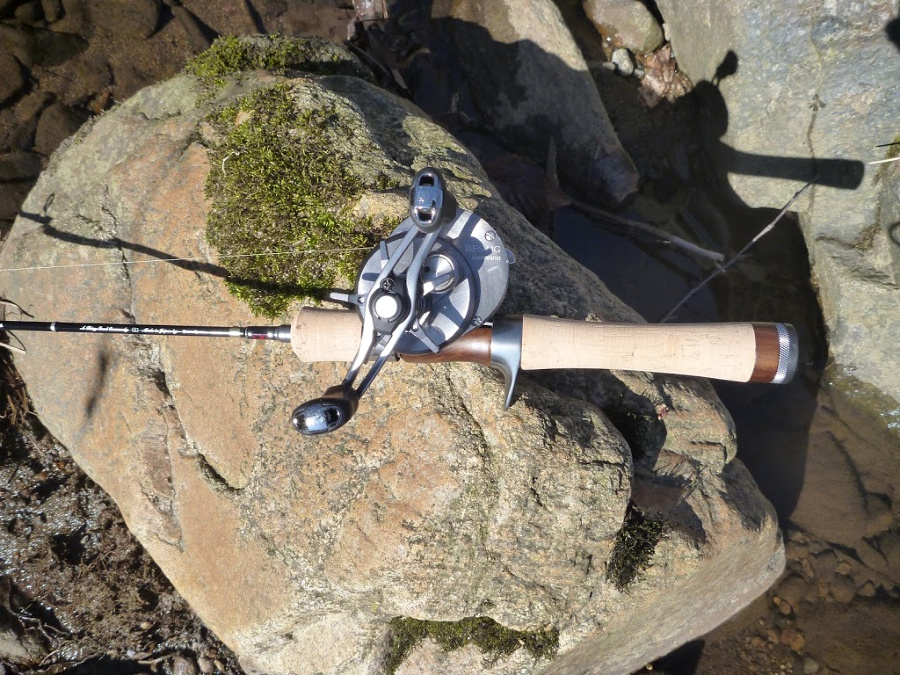