I have gotten emails from several customers concerned that their packages have been lost because they are late and/or tracking data shows them to have been in the Jersey City sorting facility for days.

Those packages are now moving. Most have been delivered already.

Please understand that shopping online this year has been unprecedented, and the USPS, UPS and FedEx are trying to run beyond their capacity. In the 10 years I have been shipping packages, (thousands and thousands of packages), the USPS has NEVER lost a Priority Mail package, and has lost only two or three First Class packages. Please be patient. Your packages will arrive.

The Shimano Trout One NS (Native Special) S53UL is a very nice, very light, very capable rod designed for stream trout.  Shimano designed the Trout One NS  with a fast taper, giving the rod a firm midsection and a relatively soft tip. The firm midsection gives you the ability to work lures up to 7 grams (1/4 ounce) and the relatively soft tip will allows the rod to cast a 1 gram lure (1/32 oz). 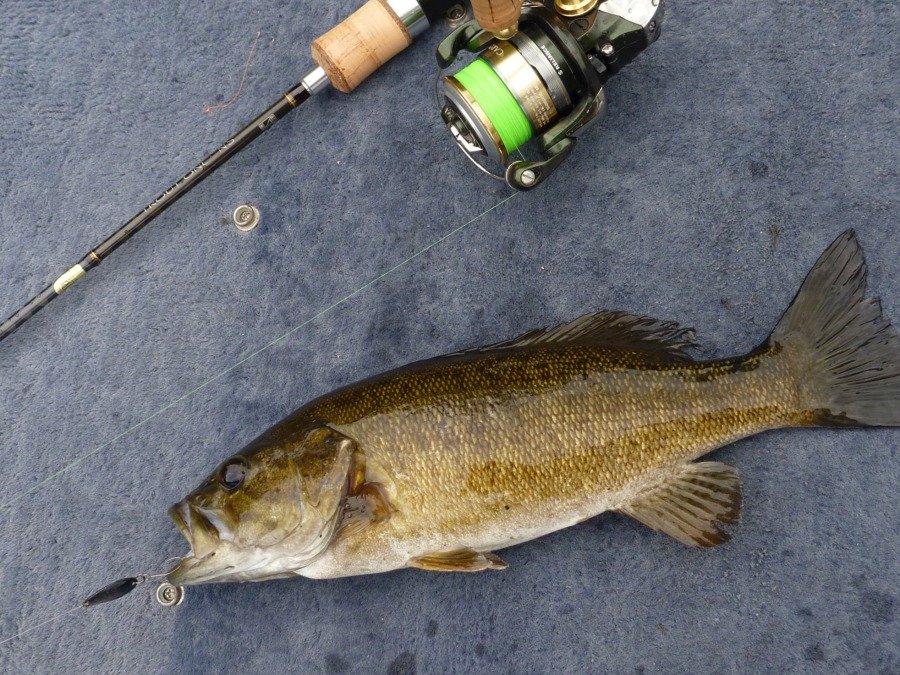 Although the rod will cast the Daiwa .8 gram Vega spoons far enough to catch fish, the 1.2 and 1.8 gram Daiwa Lupin spoons cast very nicely indeed, enough better than the Vega that I think they would be my choice for a smaller sized spoon. 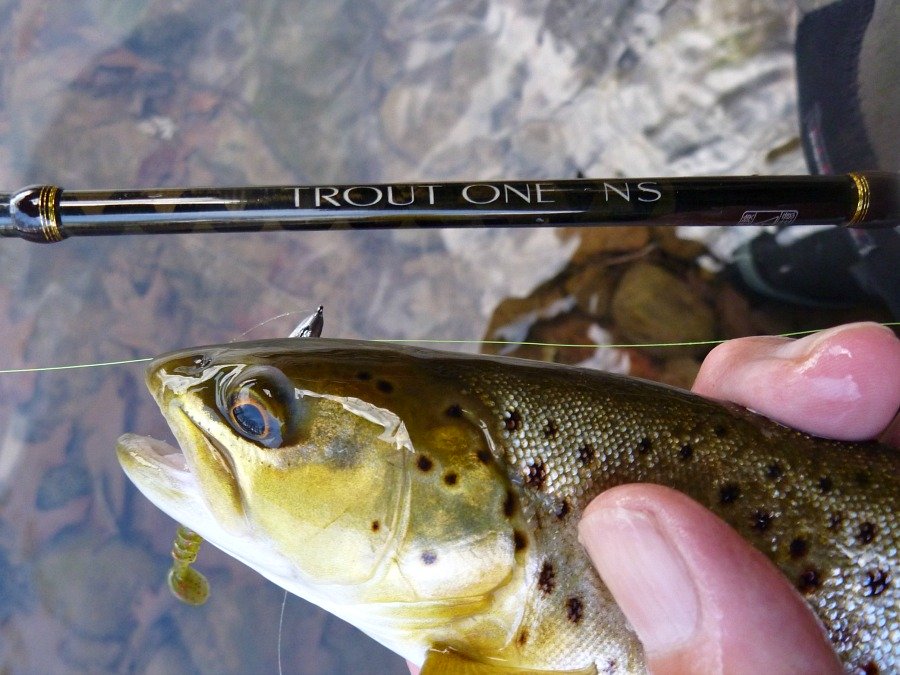 The C'ultiva JH-85 jigheads with either a Pinworm or a Ring Kick Tail Worm cast extremely well and can be worked more slowly than a spoon. If the bottom is relatively smooth, they can be hopped across the bottom to mimic a sculpin or fleeing crayfish.

It casts the 3g Smith Drop Diamond spoons like a bullet.

Heavier lures, like the 2.5 g Daiwa Crusader spoons or the 3g Smith Drop Diamond and Edge Diamond spoons cast like bullets. Minnow lures are considerably more wind resistant than spoons, but I found that the Shimano Trout One NS S53UL can still cast them nicely. The "heavy sinking minnows" like the Daiwa Silver Creek minnow or the Duo Ryuki Spearhead do even better.

The firm midsection does more than just allow you to cast heavier lures. It also allows you to land heavier fish. I wish I could show you a photo of a recent fish I caught with the Shimano Trout One NS S53UL. It barely fit in my Nomad Mid Length net. Based on the length of the net opening, I know it was over 20 inches, possibly over 22. Unfortunately, before I could reach for my camera, with one mighty flip it was back out of the net. I like barbless lures because they often come out by themselves when a fish is in the net. When this particular fish flipped out of the net, it left the lure behind, so there was no getting it back. Long story short, the Shimano Trout One NS is capable of landing very nice fish.

King of the Stream!

The fish shown above, although much smaller than "the one that got away,"  was still a very respectable fish given the size of the stream where it was caught. Although the occasional much larger than expected fish gets the adrenaline flowing, it isn't big trout - or even trout - that makes spin fishing in small streams addictive. It is the required combination of stealth, casting accuracy and yes, finesse. 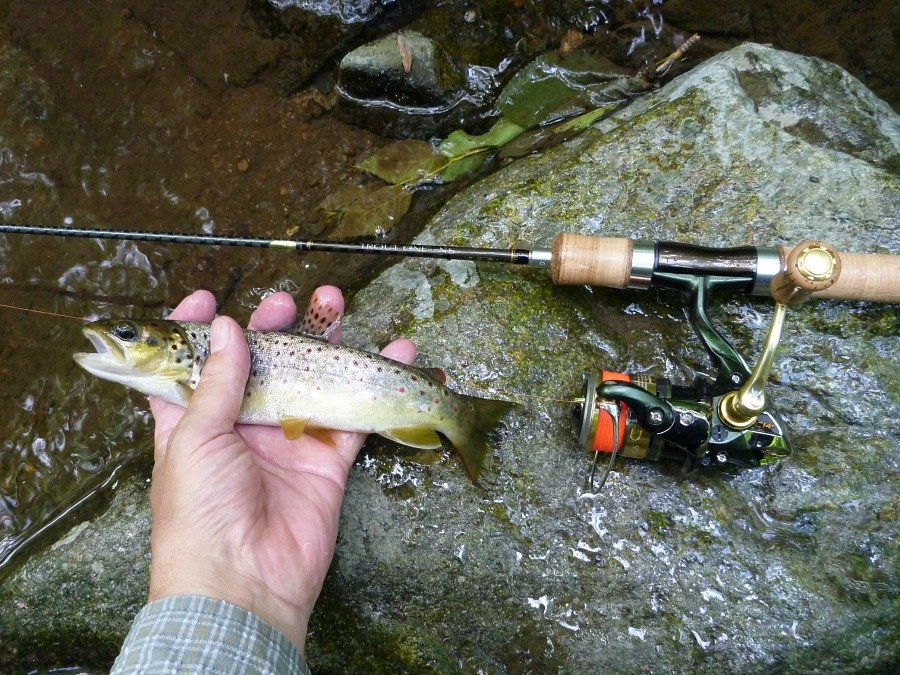 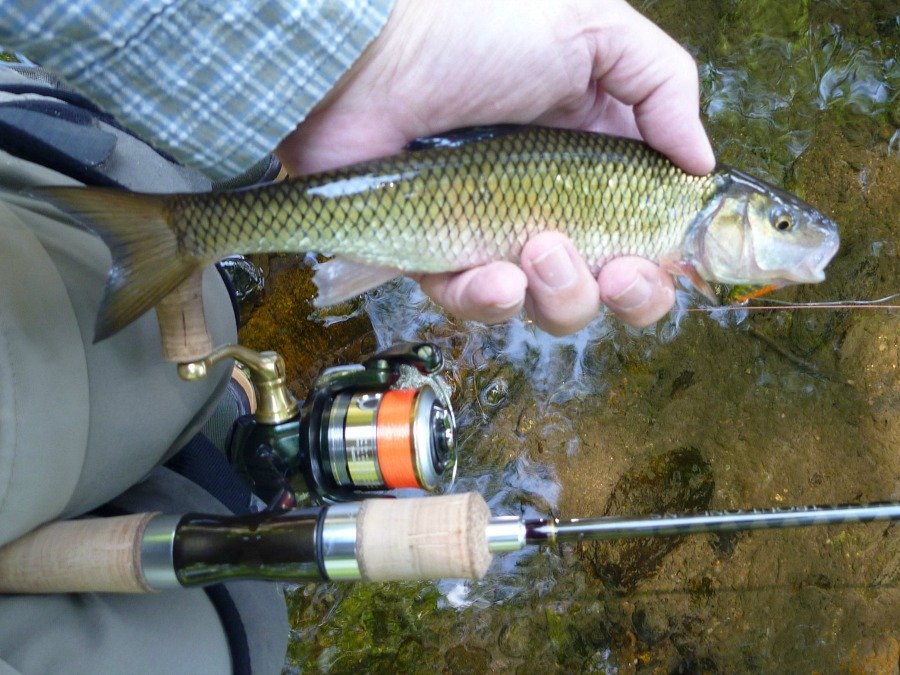 I have a friend who is considering starting a guiding business aimed at spin fishermen rather than fly fishermen. Most fishing guides in mountain states are fly fishing guides. However, most people who fish don't fly fish. I'm sure a lot of people who visit the Rockies would love to wet a line if they could fish a beautiful mountain stream, catch some fish, maybe learn some new tricks, and not feel that the guide was condescending because they use a spinning rod instead of a fly rod. I hope my friend pursues his dream. I'm sure it would be well received.

I think the Shimano Trout One NS S53UL would be an excellent choice for his business. Clients will recognize that it is a nicer, higher quality rod and better suited to stream fishing for trout than the rod they have now (assuming they don't have a Tenryu, of course). The Shimano is much more affordable for a beginning guide business than the Tenryu, though. Like a Tenryu, it fits in the Long Rod Case, so a bunch of rods in the back of his truck will still be protected. For that matter, even if you fish for fun rather than as a business, the Shimano Trout One NS S53UL would be just as much at home in the back of  your truck!

The grips are good quality cork. The reel seat is Shimano's CI4+ material, which is a light weight, rigid carbon composite.

I think the Shimano Trout One NS S53UL is an excellent rod. It is not as fancy as the Tenryu, but if you are looking for a high quality JDM spinning rod in the $200 range, I think you would have a hard time a finding better one.

Please note: when you put the sections together there will be a gap. It is supposed to be that way. Don't force it.

To be notified when a specific item is back in stock, please use the Back in Stock form on and list the item(s) you want.